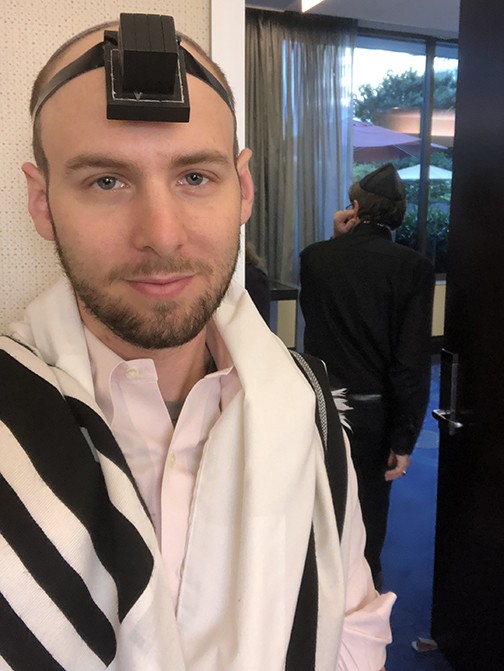 It was no small accident that I attended the latest American Jewish Committee (AJC) conference in Washington DC.

At an adult Jewish camp (Camp Nai Nai in Waynesboro PA) I met an individual who works for the AJC, and thusly, it was kismet (fate) that she let me register a mere three days before the event began. It was miraculous that I was able to attend one of the most important Jewish advocacy conferences of the year, and I’d love to share my experience with you, as it felt just like the movie “Mr. Smith Goes to Washington,” except with many more yarmulkes.

The AJC develops advocacy and coalition building to promote human rights and democratic values, specifically to enhance the wellbeing of Jews across the globe.

This convention was held at the Washington DC Hilton, and by holding the conference in Washington DC, there was no shortage of political speakers offering support for contemporary Jewish life. Pete Buttiteig, Ted Cruz, Bernie Sanders, and more spoke about the importance of Israel and Judaism in the wellbeing of American politics. Meanwhile Israeli politicians like Ambassador Ron Dermer, Ambassador Dani Dayan, and even Prime Minister Benjamin Netanyahu spoke about the importance of diaspora Jewry and the future implications of Israel in the Middle East.

Almost all of the speakers noted the rise in global anti-Semitism and the risk our children have in university settings that promote anti-Israel sentiment. These conference sessions painted pictures with broad strokes and rarely left time to ask probing questions at the end of the sessions. Nevertheless, some questions seeped through anyway.

A specific example: While Bibi Netanyahu called into the conference to highlight legitimate security concerns and the overall importance of the diaspora, Bernie Sanders called in to highlight the importance of America and Israel’s alliance, and the deteriorating conditions of Gaza and the Palestinian people. This political chasm was felt by individuals sitting right next to each other.

It is no surprise that we live in a tumultuous time, a time marked by extreme rhetoric on both sides of the aisle. It is also no surprise that Jews have always straddled this divide, often with personal difficulty during family Seders and Shabbat dinners. All considered, governmental decisions of both Israel and America’s national security have implications that go far beyond what anyone can predict. The most unanimous voice of Zionism from the conference is that, despite what happens to us in our own diaspora community, or Israel in our Jewish state, we are going through these growing pains together. Whatever climate change and the rise of totalitarian leaders bodes for our collective future, the Jewish people won’t stop being Jewish people.

The convention ended on a final note of pride: we will wear our yarmulkes in Berlin for the AJC conference in 2020.

Outside the conference room, a former student gave me a giant bear hug. Not just any student, but the High School Student Representative for AJC’s Leaders of Tomorrow, someone I had given a “Jewish rap” class to almost three years ago! “It’s so good to see you here!” he said smiling, “It feels like this is just an extended family reunion!” and I couldn’t agree more.

Though difficult queries were mulled over, there were moments of great solidarity and thunderous applause when specific speakers referenced the enormous steps of progress that they, as individuals, had taken solely on their own.

British Parliament members Joan Ryan and Ian Austin shared their story of disaffiliation with Jeremy Corbyn's Labor Party in Britain, over institutional anti-Semitism. There’s a Yiddish quote, “The fish stinks from the head,” and hearing venerable international icons talk about their commitment to democracy and to minority rights was enough inspiration for me to bring back home to central Pennsylvania.

As a rabbi, I’d be remiss if I didn’t mention the most moving part of the whole journey - waking up at 6am to get to morning minyan. Not only was the dual service options, (an egalitarian minyan and an orthodox Halakhic one), a visible commitment to religious pluralism, but having Tree of Life’s Rabbi Hazzan Jeffrey Myers say Mourner’s Kaddish in the presence of international Jewry gave me chills.

We are all bound up in the bonds of Klal Yisrael (Jewish peoplehood), and our bold assertion that we Jews must work together to improve the overall condition of humanity is laudable.

As Martin Luther King’s daughter, Dr. Bernice King, bellowed the roar of her father’s legacy, we stood and applauded: “Love is not passive, it does act in the face of violence, hate, and brutality. It acts with courage to stand up with truth and the ability to take hits, but with the refusal to inflict harm.”

May we all be so passionately called to do what is just and right in the eyes of our God, both internationally and locally.

Sam Yolen is rabbi at Congregation Beth Israel in Lebanon, PA. Follow his instagram @YoSchmu26 for continued coverage of the Jewish people.