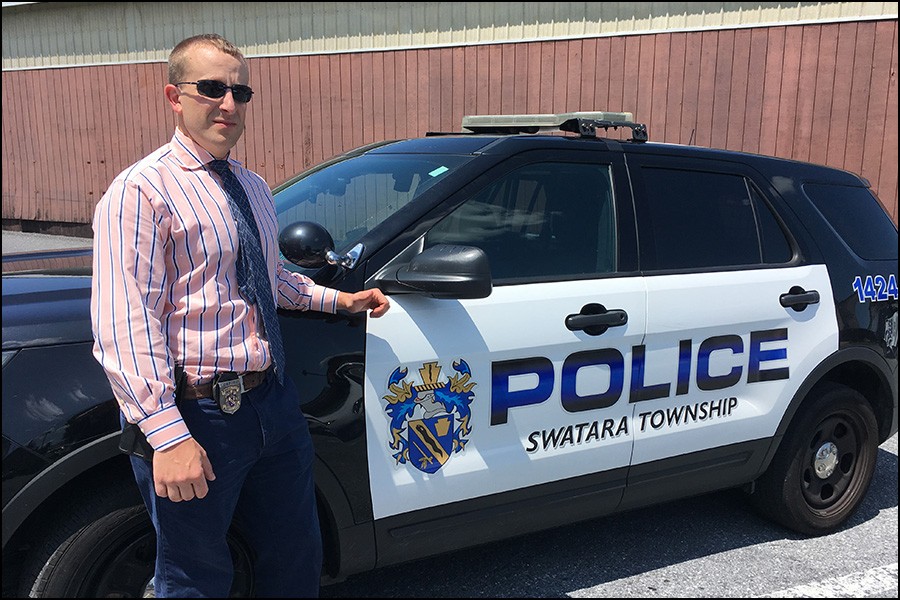 Swatara Twp. Police Corporal Isaac Levine smiles when describing how he knew his bashert from a young age.

Bashert, the Yiddish word for destiny, may have been the furthest thing from his mind when he was growing up in the Harrisburg area and attending the Yeshiva Academy.

Yet it seems he found his destiny when he was 12, after he went to the Susquehanna Twp. Police Department and asked Officer Rob Martin (now Susquehanna Twp. Director of Public Safety) if he could help out. Soon, the young boy was washing patrol cars and assisting in the office.

When Isaac was a junior at Susquehanna Township High School, he took and passed a Pennsylvania Emergency Medical Technician class. He also joined Rescue Fire Company.

“I was looking for something to do,” he said. “I loved it. I lived a quarter mile from Station 37 and was as active as I could be. I was in the top five responders there all through college. I took a lot of training and became certificated as a Pennsylvania Firefighter 1.”

After graduating from high school, he headed to Dickinson College, where he majored in international business and minored in Judaic studies.

While in college he worked as an Emergency Medical Technician, for a short time for a transport company, and then, from 2005-08, for Susquehanna EMS. He said he worked 40 hours some weekends.

Although he originally planned to be a cop for five years then go to law school, he says “the economy tanked just as I hit the job market.”

He took both the Law School Admission Test and the test for the Swatara Twp. Police Department the same year.  He joined the Swatara Twp. police in 2008 and started law school in 2012 as a part-time student.

In 2007, he had reconnected with Tori Tamanini, whom he met in middle school and lost touch with for a while. Three years later, they married and now have two sons, Reuben, 5; and Eli, six months.

Isaac said he loves working in the Swatara Twp. Police Department, where he incorporates his Jewish beliefs with his work.

He said he believes in Tikkun Olam, a Jewish concept defined by kindness to repair or perfect the world.

Isaac, a member of Beth El Temple, keeps kosher and even has shared Jewish traditions and food with other police officers.

“These guys came to my traditional Jewish wedding and loved it,” he said. “They came to both my sons’ brit milah (covenant of circumcision), as well.”

He smiled when mentioning that his coworkers tried matzah and cholent and enjoyed both the unleavened flatbread and the traditional Jewish stew.  But they didn’t care for the gefilte fish, which Isaac calls “an acquired taste.”