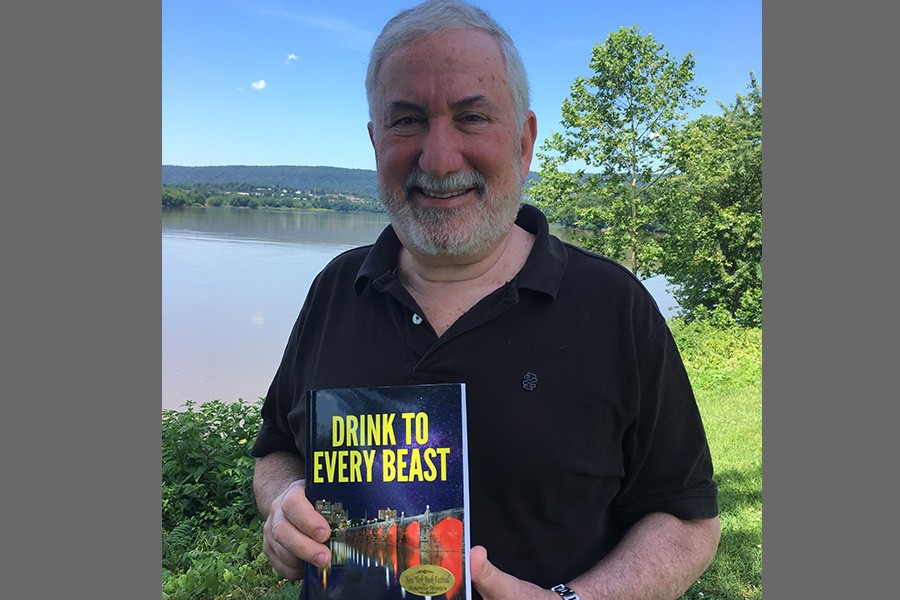 Joel Burcat could be considered a homebody.

For decades, he worked as a lawyer specializing in environmental law just a few miles from his Uptown Harrisburg home. He attends a synagogue in walking distance of that home. He lives a block from the Susquehanna River, the setting for his first novel, Drink to Every Beast.

These days, he’s busy promoting the book, billed as an “environmental legal thriller.” Although environmental law doesn’t sound like the stuff of a page turner, Joel has managed to make it one.

“Writing has been my hobby for several years,” he said “I’ve always felt that I have stories in me to tell. I started writing short stories, some based on real events, others purely fictional. The people in Drink to Every Beast, which I wrote in 2010, are fictional but some have hints of real people in them.”

The novel begins with the deaths of two teenagers who were exposed to chemicals while swimming in the Susquehanna River north of Harrisburg. Mike Jacobs, a young lawyer for the Pennsylvania Department of Environmental Protection, is assigned to investigate who dumped the chemicals into the river.

The main chemical turned out to be phenol, a caustic, poisonous substance. Joel shines in bringing to life the thought processes and behind-the-scenes work of environmental lawyers conducting investigations.

Jacobs starts his investigation even as people are dumping phenol, waste oil, benzene, PCBs, and other chemicals into a borehole where it goes into the remains of an old mine and eventually into the Susquehanna River. Descriptions are so vivid that readers almost can smell the vile mix.

The book’s subplots are just as engaging. The Governor (who is running for re-election) and his opponent each have a vested interest in the investigation – and the Governor’s opponent even offers Jacobs a job.

On the social side, Jacobs is dating two women at the same time, dealing with his mother’s Alzheimer’s disease, and checking in with his older brother (who happens to be a Chicago rabbi).

Local readers will recognize Harrisburg in the book – the Governor’s Residence with its high ceilings, circular staircase, and extensive gardens; the Harvey Taylor Bridge; a restaurant in a former firehouse; a lake in Uptown Harrisburg; apartments on Second Street and Briggs Street, and the restaurants in Strawberry Square.

They even may smile at Jacobs attending Yom Kippur services at Temple Beth Emuna, a fictional Conservative congregation.

The book has received favorable reviews from Kirkus, Amazon readers, and other authors.  Joel said he is thrilled at its “very good” reception.

Joel’s background helped to prepare him to write Drink to Every Beast.  Like the main character, he majored in physical geography at Pennsylvania State University, then specialized in environmental law at the Vermont Law School.

After passing the bar, he spent three years working at the then Pennsylvania Department of Environmental Resources, then moved over to private practice, including working at Rhoads & Sinon, then Kirkpatrick & Lockhart, and finally, Saul Ewing Arnstein Lehr. Joel spent his career as an environmental lawyer handling everything from enforcement to permitting to regulating.

Three years ago, he was diagnosed with non-arteritic anterior ischemic optic neuropathy (NAION) in his left eye. This involved the loss of blood flow to the optic nerve and caused sudden, irreversible vision loss to that eye. Last year, he developed it in the right eye.

Specialists at the Hospital at the University of Pennsylvania and Wills Eye Hospital, both in Philadelphia, and Johns Hopkins Hospital in Baltimore all agreed on the diagnosis. Unfortunately, Joel said, they also agreed that nothing could be done to reverse it.

“I’m legally blind,” Joel said. “My law firm was magnificent, but by 2018, I knew I had to retire. I transferred my cases to other lawyers. Then, I decided to work on my books.”

Joel bought himself a “yard-wide computer monitor” with a large, bright, and bold font. He dictated his work, which then went from voice to text. He hired a top-notch editor to polish Drink to Every Beast and worked hard to get the book published despite receiving numerous rejections from publishers over the years.

He’s also written Amid Rage about strip mining in Somerset County, Strange Fire about fracking in Bradford County, Firebrand about water pollution in York County, Little Brother about a police department and Whiz Kid about the 1950 Philadelphia Phillies. His future as a popular fiction writer looks bright.

“I love to write,” he said, adding that he does so nearly every day. “It energizes me.”

Burcat and his wife, Gail, have two daughters, a son-in-law, and a granddaughter. When he’s not at promotion events for his first novel, he enjoys flower gardening and cheering for the Philadelphia Eagles, Philadelphia Phillies, and Philadelphia Flyers. He attends Kesher Israel Congregation.

After interviewing Joel and reading his book, I’ve concluded that he, like Mike Jacobs, is a loveable mensch.

WHERE TO BUY THIS BOOK: Drink to Every Beast, a 352-page paperback novel by Joel Burcat, was published by Headline Books and is available at the Midtown Scholar or online at Amazon and Barnes & Noble. For more information, visit www.joelburcat.com.