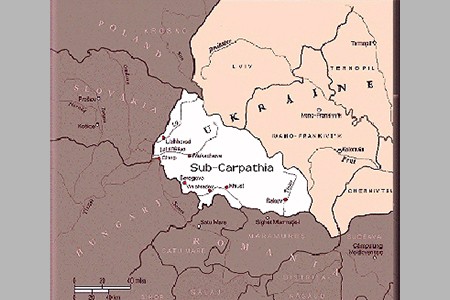 Marshall Katz has always been interested in family history.  His paternal grandfather arrived in America in 1923 and Marshall’s father was the first born American in the family in 1924.

While much of the Camp Hill resident’s family was killed in the Holocaust before he was born, he was enchanted by the stories his father’s cousin, Rudy, an Auschwitz survivor, would tell him of the old country in Klucharky, a small village in the Sub-Carpathia region.

It was in 2010 that he visited Ukraine with Rudy, who showed him his grandfather’s house and a cemetery with the remains of their family members.

Unknowingly, Marshall had begun a journey that would take him throughout Sub-Carpathia and lead him to create the nonprofit, Sub-Carpathia Genealogy. The region encompasses a central area roughly bordering and including parts of Ukraine, Poland, Hungary, Slovakia, and Romania.

“At one time, there were 631 cities, towns, and villages in Sub-Carpathia,” he says. “I’ve been to all of them.” When an abandoned cemetery was found, he continued taking photographs of each tombstone he found, more than 25,000 in all.

From the first step of seeking out cemeteries (some of which had not been visited or kept up for more than 70 years), Marshall branched out to begin collecting other documents and artifacts during his visits to the region. He returned each year from 2010 – 2019.

The project culminated with the release of a genealogy website in December 2019, which can be found at: sub-carpathia-genealogy.org.

“The primary purpose of this website is to educate,” Marshall says. “It allows people to make connections to their ancestral villages and towns and to find vital records like birth, death, marriage, census records and more.”

While Marshall’s website is not for the beginner genealogist (he recommends that researchers have a few pieces of information like name or date of birth prior to visiting his site), it gives searchers an organized place to learn history of their ancestral homelands. The site includes record search and analysis, tombstone and cemetery information, history and photos of artifacts from each town or village, travel information, and other useful links.

Visitors will find all kinds of odds and ends documents and records on the site. “When the Hungarians came in and they made all the men work on forced labor details,” Marshall says. “I have a list of the labor camp workers, those who died in the labor camps, the gendarmerie confiscation receipts from a ghetto, and the deportation lists.” Visitors to the website can directly purchase copies of any records that might be of interest or use to them.

Marshall continues to work on the website, which has more than 400,000 transcribed records and had more than 4000 visitors in its first month live.

“It’s euphoric to find new records that I’m chasing after,” he says, noting that he has some additional records to add to the site. “I want people to go here and find all the information they’d like to find.”

Why focus on Sub-Carpathia? “I feel at home,” Marshall says. “It has the same look, feel, and weather as I experienced growing up in the mountains of Southwestern Pennsylvania. The people of Sub-Carpathia are sincere and are a very hospitable people who are always ready to help.”

Marshall recounts the story of a 90-year-old Holocaust survivor who had never seen the gravestones of her relatives. “She found her grandparent’s burials and was extremely happy about it,” he says. “It is a spiritual work to know that people are able to find the family burials and records to fill voids in their family trees.”