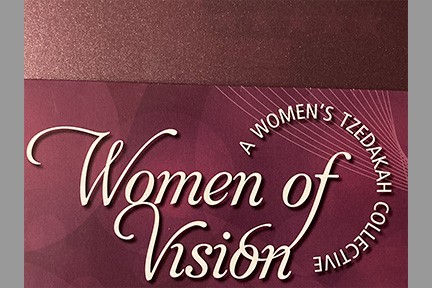 When Arlynn Weber founded the Women of Vision Philanthropic Fund in 2001, she hoped to help Harrisburg-area Jewish women in need.

From helping women return to the workplace to assisting with special needs children, Women of Vision has lived up to its role as a Tzedakah Collective, a charitable gifting circle by women, for women.

Women of Vision began with three women before falling to one. Now, it has 130 members.

Prior to the group’s inception, Weber chaired the Women’s Division, raising money for the Jewish Federation of Greater Harrisburg. She also served as corresponding secretary for the Federation and the National Council of Jewish Women. She founded Women of Vision as a way that she and her peers could help other Jewish women improve their lives.

“Members join our group with a minimum donation of $118,” said Weber, who serves as the group president. “Over 10 years, they pay other installments to equal $1,018 and become full-fledged members. We also receive donations and sell Tribute Cards to help raise money.” Eighteen is an important number in Judaism because it is synonymous with the word “chai,” which means life.

Each spring, the Women of Vision Grants Committee contacts local non-profit agencies and synagogues with applications for those who fit the criteria. Those applications ask questions about the needs of the Jewish women and their children who are applying.

The committee determines the eligibility and amount based on need analysis and fund availability. Women of Vision members then vote on who receives the grants, which range from $100 to more than $2,000, although the average is $500. Recipient names are kept anonymous.

Michele Wickwire, Women of Vision administrator, said that two grants were made in the first grant year, $175 to a middle-aged woman to renew her occupational license and $600 to a widow who needed training in computer skills so she could return to the workforce and support her family.

Since then, she said, Women of Vision has awarded four to five grants annually. The group once helped a homeless family who lived in their car. Thanks to the grant, the family was able to buy a new car and rent an apartment. The father then was able to get a job.

The spring event, held on a June evening in which grant recipients are announced, includes a chocolate buffet catered by Norman Gras. The fall event, a November Sunday brunch, includes an educational program focusing on such topics as domestic violence, clutter, alternative medicine, health care, and medical marijuana.

This year, Women of Vision will be part of a virtual Donor Recognition event at 7pm June 10 via a link that will be sent to people who register. The Jewish Community Foundation, which hasn’t been meeting in person since the pandemic, has its 20th anniversary plans on hold, Weber said.

“I can’t quite believe 20 years have passed since we were formed,” Weber said. “I have had support for my vision all these years by a core group of women who believe in what we do-our mission of Tzedakah, to help out Jewish women and children in need in Harrisburg.”