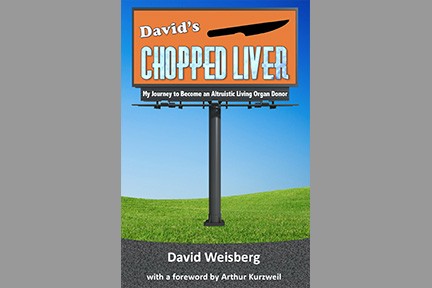 “Honor thy father and thy mother,” reads the fifth of the Ten Commandments.

Jews across the world fulfill this requirement in various ways, but how many can say they did so by donating an organ to somewhat they’ve never met?

Count David Weisberg among them.

The former Harrisburger, who spent a decade running the JCC and Federation, was hit with a bolt of inspiration in late 2017. Approaching his 50th birthday, he wanted to do something powerful to mark the occasion.

“I decided that I wanted to do something I’ve never had the chance to do – I wanted to save somebody’s life,” he says. “I had a friend who had donated a kidney and that inspired me – so I went online and found that you could donate part of your liver and it would grow back. My mother had passed away in 2009 of liver cancer, and so I decided to donate in honor of her.”

Making the decision to donate his liver was the first step in what turned into a long process captured in his new book, David’s Chopped Liver: My Journey to Become an Altruistic Living Organ Donor.

The book (which originated as a blog) captures the moments that he decided to undergo this journey up to and after his successful donation nearly two years later. In between, he shares his thoughts on the experience, his fears (mostly related to needles and MRI tubes), and his “liver playlist” a collection of songs he compiled to listen to while recovering.

But he also outlines his thoughts about what it means to give a piece of himself to another person.

“Donation is one of the most rewarding experiences that a person will have,” he says. “It’s powerful to meet the person that you’re connected with through an organ.”

Indeed, David was unsure if he ever would get to meet the recipient of his liver – a factor that did not affect his eagerness to go through with the operation.

“While I would love to meet the person who receives my liver, I also recognize that, according to Jewish teaching, anonymous giving is, in fact, a higher level of giving than that of knowing the recipient,” he says in the book. “What will be most important to me is simply to have done it.”

When David and his recipient, Joe, are introduced to each other shortly after the surgery (which, after numerous hurdles and hoops, took place in July 2019 at University of Pittsburgh Medical Center), the meeting goes even better than David could have hoped, and the two remain friends.

“A few days after we first met, the doctors brought in a special microphone and I was able to hear my liver functioning inside of him,” David says, noting that they recently spoke on the one-year anniversary of the surgery that forever intertwined their lives. “His life has been changed dramatically because I went in and had some surgery – and I feel great!”

Post-surgery, David has two goals: to inspire others to donate and to make it easier for them to do so. Throughout the process, he encountered numerous challenges in finding a match for his liver, visiting multiple hospitals and getting multiple opinions without the benefit of a national database.

“It shouldn’t be that way,” he says. “I came out of this surgery realizing that my mission was not completed simply by donating my liver – I see it as my responsibility to take those frustrations in the process and see how I can work toward change in the system.” He has since joined the board of Donate Life CT.

David hopes that by sharing his story, he can be the catalyst in getting more people thinking about altruistic donation. “I think that the small amount of pain and discomfort is so far outweighed by the feeling of good that comes from having done this,” David says. “If I could, I would do the whole thing over again.”