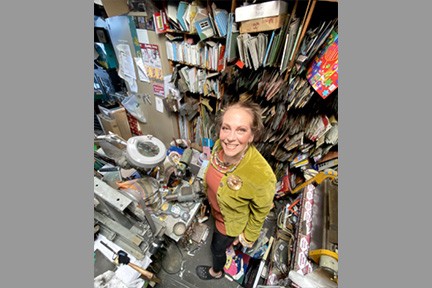 Craft in America, the long-running Emmy-nominated and Peabody Award-winning PBS program, will highlight Harriete’s jewelry as part of their “Jewelry” episode. For more than thirty years, Harriete has been using post-consumer, recycled, and recyclable materials to create jewelry, Judaica, and sculpture. Her work has been shown throughout the United States, in Europe, and in Africa, and is included in the permanent collections of numerous museums worldwide and in a number of art books.

After graduating from Susquehanna Township High School, Harriete earned her BFA from Syracuse University and her MFA from Temple University’s Tyler School of Art - both degrees with Majors in Metalsmithing. In addition to her enormous body of work, she teaches, lectures, and participates in workshops.

In 1988, Harriete began to use materials diverted from their destiny as trash. Her family and friends have collected plastic detergent containers and food trays, metal candy boxes, old dollhouses, and tossed-out toys that her dad, Leonard, sends to Harriete’s home in San Mateo, CA. Then  Harriete uses these and other items as social commentaries on such  diverse subjects as women's roles in society, identity in our consumer society, environmental issues, a critique of our current educational system, gun violence, consumer debt, and our unstable economy.

Her ornate Judaica pieces include seder plates, Shabbat candlesticks, mezuzot, spice boxes, and tzedakah boxes. She is currently working on an ongoing series focusing on the “10 Modern Plagues.”

Her works have been displayed in the Philadelphia Museum of Art, The Jewish Museum in New York, Congregation Emanu-el in San Francisco, and more.

Visit pbs.org/craft-in-america to view or find airtimes for the Craft in America program featuring Harriete and her work.

For more info on Harriete and her artwork, visit harrieteestelberman.com.