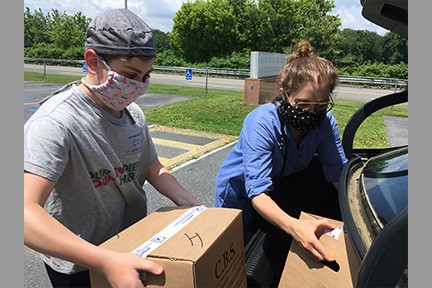 Shortly after the COVID-19 pandemic hit Pennsylvania, many communities started grab-and-go meals providing breakfast and lunch to children under the age of 18.

The Jewish Federation of Greater Harrisburg, Teach PA, Norman Gras Kosher Food Consultant, and Jewish Community Foundation of Central PA have teamed up to offer such a program, too. The community’s free Kosher Grab-and-Go program, which began in Harrisburg on Father’s Day, offers families a box with five breakfasts and five lunches for each child under the age of 18.

The program, expected to run through Aug. 30, is open to all families regardless of what school the children attend, family income, or religious affiliation. Children participating in the Jewish Community Center’s Early Childhood Program or Summer Break at the J are not eligible because they already get these meals at the daily programs.

“Our federal and state governments have expanded child nutrition programs during COVID-19 to make life easier for families, ensuring that kids are fed daily nutritious meals, which can be an extra burden in a chaotic time,” said Arielle Frankston-Morris, executive director of Teach PA, a project of the Orthodox Union. “All children under 18 are welcome to participate.”

She said that the federal Families First Coronavirus Response Act removed previous participation barriers such as income and geographic location, Pennsylvania adopted the program and soon sponsors, vendors, and pickup sites were secured.

Teach PA reached out to Jenn Ross, Federation President and Chief Executive Officer, and Norman Gras, owner of Norman Gras Kosher Food Consultant, to bring Kosher Grab-and-Go to Harrisburg.  The rest, as they say, is history.

On a recent Sunday, Ross, Frankston-Morris, and a group of volunteers stood at the entrance of the Jewish Community Center awaiting vehicles of recipients. One by one, each recipient pulled forward, gave their name, address, and number of children under age 18, pulled forward a bit more, and expressed gratitude as masked volunteers loaded boxes of food in their trunks.

“This is all about kids and food,” said Frankston-Morris, who grew up in the Harrisburg Jewish community. “Many parents have been furloughed and laid off. Others are working at home and don’t have time to cook for their kids, who have been home since March.”

She helped one of the youngest volunteers, Yaakov Reid, 12, put boxes in a recipient’s trunk.

“This program is a good idea to help people,” said Yaakov, a seventh-grade student at The Silver Academy. “The boxes even have chocolate milk, which I like.” He smiled when asked how he did during The Silver Academy’s months of virtual learning. “I did OK,” he said, “but I like normal school better. I missed my friends.”

Fifty-two families, mostly from Dauphin County, received the meals in the early weeks of the program. Breakfasts feature cereal, milk, fruit, and omelets, while macaroni and cheese, chicken nuggets, fruit, vegetables, pretzels, or animals crackers may be in the lunches. The food is provided by CBS Kosher Food Program of Huntingdon Valley.

Recipient families have been delighted. Gras said that one parent called the boxes “wonderful,” called the choice of food “inspired and varied,” and praised the inclusion of fresh fruits and vegetables.

"Feeding children addresses the most basic and critical of humanitarian needs," said Paulette Keifer, Executive Director of the Jewish Community Foundation of Central PA. "Our board has agreed that this is an important part of the Foundation's mission and we are pleased to be able to help lower the costs of food for children under 18 and the Summer Break and ELC programs by providing financial subsidies to support food distribution."

Word of the program is spreading. Frankston-Morris said that a police officer stopped by during the first week to see what the program was about. When he heard, he called it an “incredible program” and asked if he could spread the word to people he saw facing food insecurity.

“I was thrilled to offer the resource to the greater community,” Frankston-Morris said. She added that volunteers are critical for distribution. People who wish to volunteer on distribution days should contact her at ariellefm@ou.org.

Frankston-Morris said that Teach-PA has helped coordinate service for nearly 40,000 free kosher meals in Pennsylvania. Ross said she’s thrilled that Harrisburg is part of that service.

“It’s a wonderful program, not just for the Jewish community but for the whole community,” Ross said. “It’s been well-received here. We’ve had volunteers from the community at large helping. This is a good thing for everyone.”