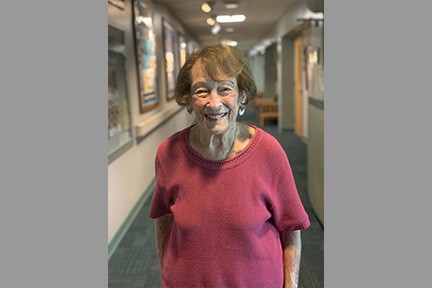 Anita Post first became involved with the JCC’s Senior Adult Club about eight years ago, after her husband passed away.

Senior Adult Club was a regular feature in Anita’s life, but it wasn’t the only thing – she was also involved in volunteering at Whitaker Center and she attended the club’s lunches and programs when she could. It wasn’t until the Covid-19 pandemic began that she came to rely on the club’s programming on a weekly basis.

“During the pandemic, when everything closed, Cheryl Yablon had Zoom meetings every Tuesday and Thursday and led us in exercises,” Anita says. “It gave me a chance to keep in touch with my friends and to not feel so isolated.”

Now, Anita says “I have all my energy here” after being elected as the new Senior Adult Club President last month, succeeding President Emeritus Nancy Bayuk.

As President, Anita opens the meetings, shares news and updates, and assists Director Cheryl Yablon in coordinating the ins and outs of Senior Adult Club programming. Cheryl is happy to have the help of Anita and all the club’s officers and volunteers.

“The Senior Adult Club is thrilled to have Anita as our President for the next two-year term,” Cheryl says. “She is a sprightly, energetic person who brings warmth and friendship to all. We thank Nancy Bayuk for her nine years as an outstanding president, and we are looking forward to having Heather Jackson join our officers as Membership VP.”

In addition to her duties as President, Anita attends as many programs as she can – joining for lunches twice each week, travelling to theatre shows, and socializing at the club’s gaming sessions, where she’s introduced the game of rummikub to the group.

“We have a ball in here,” Anita says. “We’re loud, we laugh, and we don’t keep score – something that just lifts your spirits.”

Anita lauds the programming that Cheryl consistently brings to members, which she feels attracts great people and helps to form close friendships.

“I have many old friends that come, and also have made new friends,” she says. “It’s nice to say hello to everyone and have everyone say hello back.”

She says that she is looking forward to representing the club as it has continued to gain steam in the past six months, with participation steadily increasing since senior lunches resumed last fall.

“Lately, we’ve been getting forty – fifty people each program,” she says. “The club is growing, and it’s wonderful.”