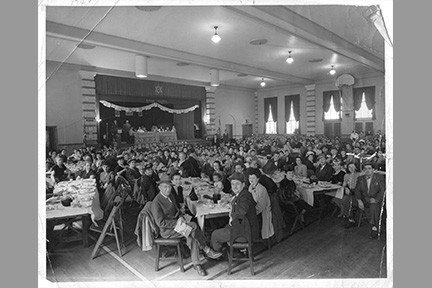 Though Janice Apple Malett has not lived in Harrisburg for more than fifty years, she has fond memories of the Jewish community that she grew up in - from the Kosher bakery that her parents Bess and Moe Apple owned with her aunt and uncle Dorothy and Jerry Pollack to spending summer days at Green Hills to the Jewish shabbatons of her youth.

“My parents would host fifteen of my brother’s fraternity members, all sleeping on our living room floor,” she recalls. “Dad would come home from the store on Sunday with about twenty dozen bagels, lox, and cream cheese to feed them all.”

It was all part of the giving and welcoming nature of the community, she says. This was best exemplified by the way in which Holocaust survivors, like her Hebrew school teachers at the 3rd Street JCC (then known as “the Y”), were blended into the neighborhood.

“One day after Hebrew School, the lobby was filled with people who had been brought in as displaced persons from the war,” she says. “My memories of Harrisburg are of a very giving community that embraced people who had lost so much – and those people in turn contributed so much.”

Though she left Harrisburg at the age of 17 – she now lives in Somers, NY - she has always felt a connection to the town where she grew up, tethered by frequent visits to family and friends still living here. Now, as a member of the Harrisburg Haverim Society, those bonds feel even stronger.

The Harrisburg Haverim Friends Donor Society is an initiative of the Jewish Federation of Greater Harrisburg to engage former residents who still have strong connections and commitment to the Harrisburg Jewish community.

The initiative was started shortly after the 2011 flood of the JCC, says David Raffel, the unofficial chair of the project.

“The goal is, first and foremost, to get more Harrisburg ex-pats involved in helping the community, because it was such an important aspect of our lives,” he says.

David, who made Aliyah in 2019 after living in Kansas City, leads the grant making effort, coordinated through the Federation and Jewish Community Foundation of Central PA that is at the core of the initiative. Those that have moved away can join the society by making an annual gift to the Federation’s campaign of at least $180, and receive votes in the grant process based on their giving levels.

“This year, we gave out almost $3000 to four different organizations in the area,” he says. Projects that have been funded include The Campus of the Jewish Home’s Meet Your Neighbor Program, Federation’s Holiday Happenings, Temple Ohev Sholom’s spring event, and The Silver Academy’s monthly Rosh Chodesh Program.

Haverim Society also leads the Legacy Hall initiative, in which members of the community can be honored in the Harrisburg JCC by friends and family. David’s father, Maish, was one of the first honorees.

All of this leads to increased participation and connection between Harrisburg and its “diaspora.”

“I feel that I’m very connected to the Jewish community,” David says. “It’s a wonderful feeling to give back to the organizations that were so important to my development in the early stages of my life.”

“I want the current kids to have the same wonderful memories of Purim carnivals, model seders, and mother’s frying latkes that I have,” she says.

And though the programs she experienced may have evolved over the years, they still impart the same values that she has carried throughout her life and beyond Harrisburg.

“The things that resonated with me and helped me grow and develop were the Jewish education, philanthropy, helping others in need – I would like to see that continue to be perpetuated in the community,” she says. “My connection and feelings about Harrisburg are out there in a lot of people.”