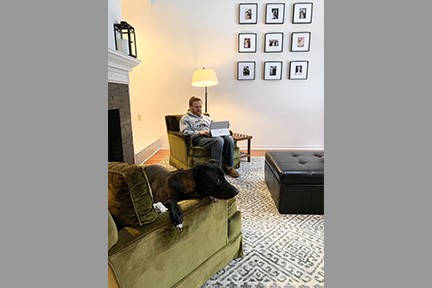 With his loving dog keeping him company, Alex Halper looked quite at home making Super Sunday phone calls this year.

No wonder! He was at home during Super Sunday 2021, which was nothing like this day the past few decades.

The iconic desk-top phones used to call hundreds of community members remained in storage at the Jewish Community Center. The venerable white ceramic bells remained silent instead of ringing at each successful call.

Yet twenty volunteers ranging in ages from their 30s to their 80s kept the annual phone-a-thon tradition going by making the calls from their homes on a snowy morning following a year dominated by COVID-19 concerns. Like so many other traditions these days, Super Sunday, the centerpiece event of the Jewish Federation of Greater Harrisburg’s annual fundraising campaign, was not done in person.

At the end of Super Sunday, the calls had raised just under $48,000, with 123 gifts total between the phones and online. This year’s theme was “Together We Can.”

Like other Super Sundays, the event involved callers contacting hundreds of potential donors and asking them for financial pledges to support critically needed services for the Harrisburg community. This year’s volunteers made the calls from their homes.

Halper was in his living room with Kelce, a 2 ½ year-old German Shepherd mix, watching him call dozens of Jewish community members. Kelce, named after Philadelphia Eagles’ Jason Kelce, stared at Halper in fascination as he made the calls.

Outside the window, other Halper family members were playing in the snow.  Inside, Halper spent two hours making his calls.

“I had conversations with about 15 people and left messages for another 25 or so,” he said. “I even talked to a very nice lady, a member of our community who was near Jacksonville, Fla. It was sunny and warm there but she said she was living vicariously through us for the fun of the snow.”

Halper described missing the fun of making calls from the Jewish Community Center and hearing the ringing of the bells. “Yet, there was something gratifying knowing that even in this most unusual of years, there are still some traditions like Super Sunday maintained.”

Dan Green, a community member who has volunteered on Super Sunday in the past, was on the receiving end of a call this year – which he gladly answered.

“We have a responsibility to keep our Jewish community going here,” he said. “This is one small way to do it.”

He said that he and his wife give to the campaign because of the work that the Federation does in tying the community together and the programs that his family, including two kids, participate in.

“Our kids participate in Iddy Biddy, swim classes, and both attend the Early Learning Center,” he says. “It’s connected us with our friends and made us closer to our community.”

Rabbi Elisha Friedman, a Super Sunday caller for five years, called nearly 30 people, leaving messages at most homes. He said he made the calls from his couch after his wife took their three children out.

“The people I reached were friendly and happy to give,” he said. “I actually thought less people answered this year than usual, but I also made more calls because there was less schmoozing going on.”

The rabbi said that he missed the energy of other callers ringing the bells when they got a pledge.

“Every year, I’m happy to participate in Super Sunday to ensure the community gets the funds needed to continue its vital role and services,” he said. “There are so many people who are happy to give if we just call them! If we don't call we miss out on their support. So it's really important to make these calls.”

“People were responsive to my pitch that they consider an increase due to the pandemic,” he said. “I think people were home more due to the pandemic than to the snow. It was a wonderful time to catch up with people I hadn’t spoken to since before I came down with COVID and retired from the Jewish Family Service.”

Stein said he liked making phone calls from home instead of the Jewish Community Center because “it was much easier to concentrate on what I was doing. I did not miss all the distractions that usually accompany the Super Sunday routine.”

Gerry Gorelick, a Super Sunday caller for more than two decades, said that those he called were receptive and supportive of the campaign. He found more people at home than usual, which he attributed to both the pandemic and the snow.

“One person I called had phoned in to the campaign staff to make a pledge and increase giving from the prior year shortly before I called,” he said. “Talk about making it easy for me! Knowing that others were doing the same from their homes gave me a boost to plow through my calls.”

Matti Rischoni, a new Super Sunday caller, said he called ten people from his bedroom. Abby Smith said she mostly got voicemails from the people she called.

The money also helps educate children, links Jews to each other, expands social and wellness programs for seniors, and supports everything from the PJ Library to Community Review to Shalom Neighbor Directory.