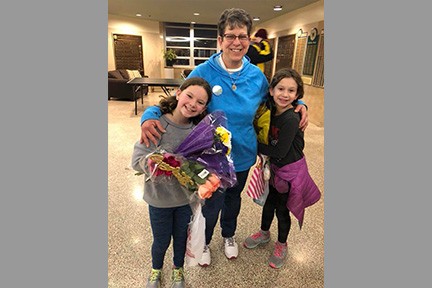 The costumes were sewed and mended. The cast knew their lines and cues.

Then the coronavirus pandemic took hold.

So, while Mary Poppins was supposed to mark the end of more than 50 years of involvement in JCC Theatre, and nearly 35 years as an employee across many departments, the show would not go on for the first time in Terry’s career.

“So much has been taken faway from these kids since the shutdown and we did not want to add to that,” says Terry, noting that they held off fully cancelling the play for as long as they could. “We had a great time in rehearsals, so even though we did not get to perform in front of a live audience, we had fun being together!”

Terry moved here with her family at the age of six, and first got involved in the JCC through her mother, Marilyn, who participated in plays as an actress. “We lived across the street and I would come here for all the rehearsals,” Terry says. “In those days, your life was here at the JCC. You would come at 9am and leave at 7pm.”

She remembers attending camp as a child, and BBYO as a teenager. After graduating college, it wasn’t too difficult to get Terry back to the JCC, where she worked first as a counselor, then as a chaperone in the tween lounge, and - starting in 1985 - as the first director of the new early learning center.

She’s been a source of encouragement and knowledge to children in the community ever since.

“I taught for 26 years and came after school every day for after-care, winter break, in-service, and other camps,” she says of her longtime work as Children & Youth Coordinator, which she would perform after a full-day’s labor as a teacher in the Harrisburg School District. “I wanted the kids to have the same experience that I had growing up here. Memories last a lifetime.”

Terry began working at the JCC the very same month as Andrea Weikert, who she would work alongside all the way up until 2019.

“How do you sum up over 30 years of working directly side-by-side with Terry Fisher?” asks Andrea. “It really can’t be done in words. When you think of the JCC, Terry Fisher comes to mind. Terry would do anything and everything. She consistently went above and beyond. She taught, she baked, she nurtured, and molded thousands of young lives. She was passionate about her job responsibilities and dedicated to all the children and their families she had the opportunity to work with.”

Andrea and Terry worked together throughout many summers running the JCC Day Camp at Green Hills. “We lived nine months for the other three – that was camp,” says Terry. “Just being with the counselors, watching kids grow, watching them have fun—seeing a kid that couldn’t pass the deep water test, and then six weeks later, watching them try to do that and having the whole camp cheer them on. That was fantastic.”

From working in the community for generations, Terry has gotten to know multiple generations of entire families. “I have kids of kids that I knew at camp,” she says.

One former-camper-turned-counselor-turned parent is Lara Novak, whose two children went on to be campers.

“Although time has passed, it seems to have passed right by Terry – I don’t think she ages,” says Lara. “Terry is giving, caring, always sharing, and always has her focus on the kids.”

It is the extra attention to detail or to a child who needed a little extra help that parents and coworkers say they will miss.

“She is incredibly hard working, never stopping until the task was complete, and she put her love and care into everything she did each day,” Andrea continues. “Terry was at the origin and the evolution of what the JCC programming and Summer Camps are today.  She has touched so many lives and made a positive impact on generations of children who passed through the doors of the JCC.”

While some memories of Terry evoke thoughts of patience and care, others bring the taste of her JCC-famous cooking and baking to mind.

“I would be remiss if I did not mention her most delicious chocolate chip cookies, noodle kugel, and hamentaschen!” exclaims Andrea. “Terry’s shoes will never be filled and I am so blessed to have had the past 30 years to spend with her. Thanks for everything, Terry. You are a Harrisburg Jewish Community treasure, never to be forgotten.”

Terry says that she will miss working with the children of the JCC on a daily basis after being in the building for so long.

“Emotionally, it’s very difficult to leave,” says Terry. “When you have a child - that gives your whole life meaning. I didn’t have that, but I had this. So, it gave my life meaning and purpose, and I hope that I’ve had an impact.”