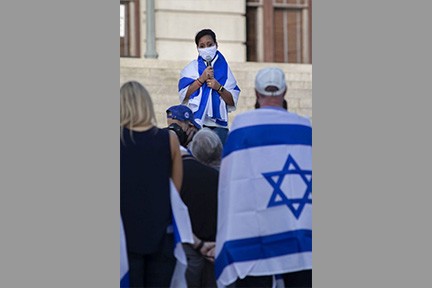 The three days of planning the Israel Rally for Peace was truly as exciting as the event itself, revealing a lot about our community and how we work together.  I hope you will agree!

Mickey Shefet deserves the credit for originating the idea and was a driving force toward implementation.  On Monday late afternoon, I received a telephone call from Oren Yagil, with a question, “what do you think?’ With the third war with Hamas since Israel withdrew from the Gaza Strip in 2005 (plus many flareups) and over 3,000 rockets launched from Gaza against Israel in 5 days, the answer was easy.  “Let’s do it.” The event would be sponsored by the Jewish Community Relations Council of Greater Harrisburg.

Over the period of three evening zoom calls and lots of behind-the-scenes work, an awesome team of selfless volunteers brainstormed, addressed security, arranged speakers, set the venue, schlepped microphones & speakers, ordered flags, videoed the event and developed the theme for the rally.

The energy, creativity, and spirit of volunteerism was consistent and impressive. Here is one example.   Realizing that we were incurring costs, one volunteer said, “I will pay for it.” Another said “Let’s split it.” A third said “Count me in!”   On very short notice, the Jewish Community Foundation supported the rally to assure proper security and a quality event. THANK YOU, Paulette Keifer!

Behind the scenes, we coalesced in somewhat haphazard fashion to contact members of our community to attend.  Some of those contacted acted as multipliers, contacting others.  Whether people would attend on short notice was a lingering concern through Thursday afternoon.  Would concerns about COVID or perhaps security prevent us from a meaningful rally for Israel? Rabbi Ron Muroff, available because his flight to Israel was cancelled, invited Rev. Russell Sullivan as a guest speaker and masterfully acted as our MC.  Students from The Silver Academy made signs and beautifully sang the US and Israeli national anthems.

The ad hoc committee, while representing various opinions and viewpoints, was consistent in the message that the rally is not a political or ideological statement, simply a   rally for Israel and for peace.   Bottom line, the rally attracted 150-160 participants, many who hadn’t seen one another in over a year.  Perhaps, the committee also led to new friendships and ties to enable us to work together on a future project as well.

Thank you to my fellow Team Members: