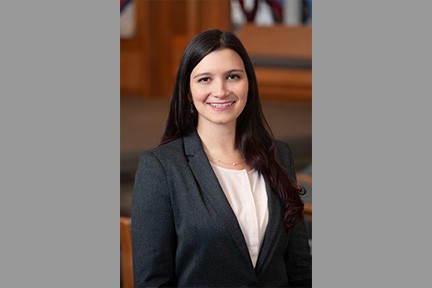 Rabbi Capptauber most recently served as rabbi of Congregation Eitz Chaim in Monroe, NY, and as a rabbinic intern at Temple Israel Center in White Plains, NY. In May 2020, she received ordination and a Master’s Degree in Midrash from the Jewish Theological Seminary. Capptauber also holds a Bachelor of Arts degree in English Literature and Peace and Justice Studies from Tufts University in Massachusetts.

“Being able to step into such an engaged and well-organized congregation is such a gift, and it is a real testament to the hard work of the lay leaders and rabbis who preceded me,” said Rabbi Capptauber. “The community has warmly welcomed me and my family and I have felt fully supported stepping into the role of rabbi. I am thrilled to join the Beth El Temple family, and to bring my passions for Jewish texts and traditions, justice, the arts, interfaith learning, and community engagement.”

The granddaughter of a Holocaust survivor, Rabbi Capptauber grew up in Potomac, MD. She attended the Charles E. Smith Jewish Day School and B’nai Tzedek Congregation, where she was a regular Torah reader.

“We are thrilled to welcome Rabbi Capptauber as our new spiritual leader,” said Rick Leiner, president, Beth El Temple. “I am so impressed with her proactive approach. It made me feel great about our decision to engage her. Our new rabbi has made such an outstanding impression on everyone that she has met. We are committed to making sure that Rabbi Capptauber has a smooth transition.”

In addition, Rabbi Capptauber’s passion for stories and justice translates into a deep love for Jewish tradition. She is married to Baruch and they are expecting their first child in July. Keep an eye out for a profile of Rabbi Capptauber in a future edition of Community Review.

“Rabbi Capptauber was the unanimous choice of the selection committee,” said Harvey Freedenberg, co-chair, along with Abby Smith, of the committee. “We felt that she is very intelligent, committed to Conservative Judaism, and engaging. I am confident she will continue to honor the strong traditions of Beth El Temple and lead us in a positive direction.”