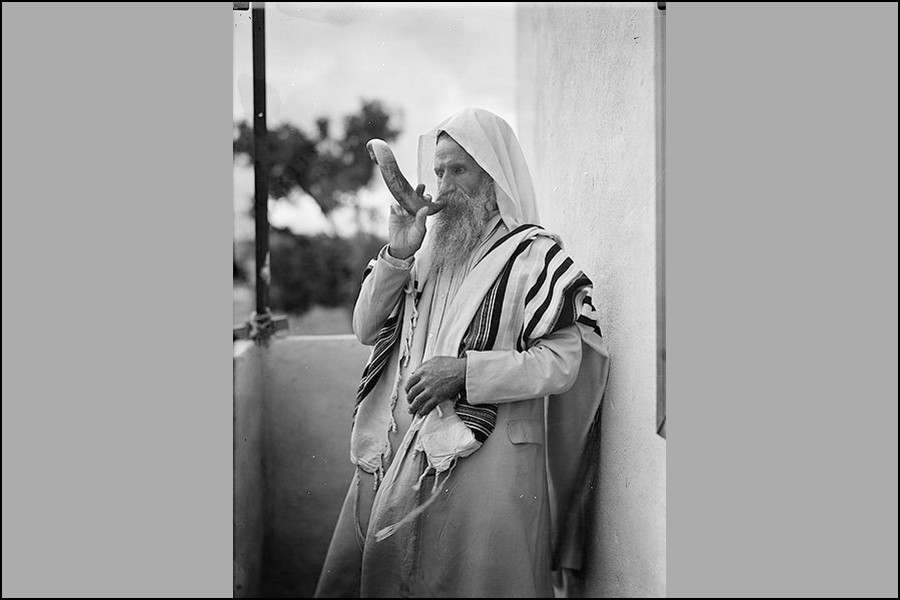 Chuck Kline chuckles recalling the day his Hebrew School teacher picked him to play the shofar for the junior congregation at Rosh Hashanah.

“The smartest boy got to be the rabbi,” Kline said. “The boy with the nicest voice got to be the chanter. Then the teacher grabbed me by the ear and said ‘you give me the most trouble. You have so much hot air. You can blow the shofar.’” Eighty years later, Kline is still at it.

Chuck’s early days as a shofar blower got off to an interesting start. Once, while he was serving as a U.S. Navy Hegins boat coxswain in the Philippines, he got a call on the radio that officers needed someone who could blow the shofar.

“I was 18 then and said that I knew the calls,” Chuck said. “So the next morning, they picked me up in another boat and took me to New Guinea. I blew the shofar at the service and it went well. I even got a week of rest.”

Chuck has been blowing the shofar at Chisuk Emuna for nearly 70 years, something he never expected to do.

“I started blowing the shofar for Chisuk Emuna back when services were held in the Jewish Community Center building,” he recalled. “One year as the service was about to start, someone realized that there was nobody to blow the shofar. I was asked to do it and someone handed me an old dried out shofar. They took me to the gym and I had 10 minutes to practice.”

For the first few minutes, the practice didn’t go well. Chuck was blowing but “couldn’t even get a toot out of it. Suddenly, I got some squeaks. I was told ‘it’s OK, they won’t know the difference.’ So I went to the bimah. Nobody was more surprised than I was when I actually got the right sounds.”

When Chisuk Emuna moved to its then new home on North Fifth Street in 1957, Chuck blew the shofar. He’s been the official shofar blower there ever since.

“I knew I needed to have my own shofar,” Chuck said. “So my wife, Ruth, and I went to the religious store in the Jewish quarter in New York City to get one.”

Because 18 is a spiritual number in Judaism (and maybe because that was all the congregation could give him back then), Chisuk Emuna gave Chuck $18 for a new shofar. Unfortunately, that wasn’t nearly enough.

“Ruth and I went up some rickety steps to the store,” Chuck said. “The owner’s son brought out a bushel basket of shofars, dumped them on a table and told me to pick one. I found one I loved -- and it was the best one they had. The salesman said he could sell it to me for a special price of $85. When I told him Chisuk Emuna only gave me $18, he said, ‘son, you belong to a cheap shul.’”

When the store owner heard the discussion, he came out and talked to Ruth for a few minutes. He gave her a bag of dreidels, sold her four challah knives, and told his son to sell Chuck the shofar for $45.

Chuck knew a bargain when he heard it. “So I got out the $18, added $27 from my wallet and we walked out with the shofar, dreidels and challah knives,” he said. “It was a good thing I had enough gas in my car because we had no money left!”

Since then Chuck has blown that shofar at all the important events at Chisuk Emuna, from the high holy days in 1957 when the synagogue at Fifth and Division streets was new to the groundbreaking in 2011 for the present Chisuk Emuna at 3218 Green St. That shul replaced the former one which was destroyed by fire in 2009 just days before Passover. Mostly, Chuck has blown the shofar on Rosh Hashanah and Yom Kippur.

The shofar made of a ram’s horn lacks pitch altering devices. But Chuck has the skill and energy to do the pitch control himself. In blowing his shofar, he not only fulfills the commandment given in the Torah but he produces divine and earthly sounds which remind people to stay close to God.