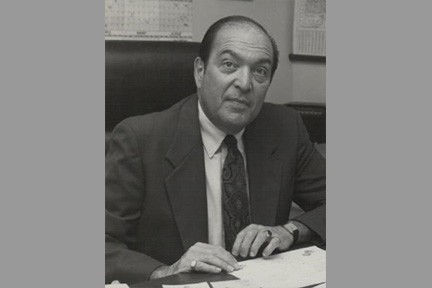 With a fist bump and a smile, and a story or two, you knew when Samuel Yespy was at Chisuk Emuna Congregation’s evening minyan.

Sam regularly attended the weekday evening minyan at Chisuk Emuna for decades. Wednesday was his day of choice, attending an extra day if he knew he would be away the following week. He said Kaddish every time there was a minyan, always elevating his voice in the last line of the prayer. In the 1980s he regularly drove his uncle, Milton Urie, to minyan. Sam previously volunteered for the Chisuk Emuna Chevra Kadisha, helping to prepare those who have just died for burial, an important mitzvah because it can’t be reciprocated.

Every congregation in Harrisburg has a person or group of people to oversee the synagogue’s cemetery. For the last twenty-three years at Chisuk Emuna, that person was Sam Yespy.

“Sam ensured that every family was cared for and that all those buried at the cemetery were treated with the utmost respect,” Rabbi Ron Muroff said.

Sam’s brother, Marty, told Sam that he was doing the Lord’s work for always checking on the cemetery.

Tim Hobbs, a funeral director with the Hetrick-Bitner Funeral Home, told Sam’s wife, Gail, that Sam worked hard to ensure that the cemetery chapel was always immaculate and the grounds were well taken care of.

Sam upgraded security and lighting at the cemetery and oversaw recent property improvements at the cemetery. Sam recently had the pillars at the entrance to the premises repaired and had the building power washed.

“Without any fanfare or recognition, Sam worked tirelessly to oversee every aspect of the operation of the shul’s cemetery,” Rabbi Muroff said.

In addition to overseeing the grounds, he also sold cemetery plots and made sure every bill was paid. He paid attention to the smallest detail. If he wasn’t able to attend a funeral, he would check in with Rabbi Muroff after the service.

He also expanded the cemetery, opening its newest section in 2012. The cemetery has owned that piece of land for years, but the first person was buried in Section E that year, which is located above the Kesher Israel Cemetery.

Sam visited the cemetery once a week, sometimes more. Gail said that Sam was devoted to the cemetery, and took the responsibility for overseeing it very seriously. Sam took pride in his volunteer work; as Sam always said, “you have to give back.” And he did.

Sam was devoted to his work with the cemetery up until the last weeks of his life. Even during a recent illness in the hospital, Sam still made calls from his hospital bed regarding the cemetery.

Sam grew up at Chisuk Emuna and was the son of Abe and Ada (Zommit) Yespy. He is survived by Gail; his brother, Marty and his wife Nancy; and Sam’s dog, Snowie. He was also the cousin of Libby Urie and Daniel Urie.

Sam was buried in front of his parents in a place close to the chapel and the front gates of the cemetery, allowing Sam to continue to keep an eye on the grounds for eternity. There are about 1,100 people buried in the Chisuk Emuna Cemetery including all of Sam's grandparents and a number of other relatives from the Yespy, Zommit, and Urie families.

Over the years Sam had the support of his wife, Gail and the assistance of Yale Gordon, Herman Gordon, and Harvey Danowitz, all of blessed memory, and Dan Grabenstein and Bill Smith. Members of the Chisuk Emuna Chevra Kadisha and the Chisuk Emuna Sisterhood also provide vital services.

Sam always talked, always had a story, and always said “zei gezundt.” May Sam’s memory be for a blessing. May his soul rest in peace. And may his family, friends, and all those who mourn him live in peace.