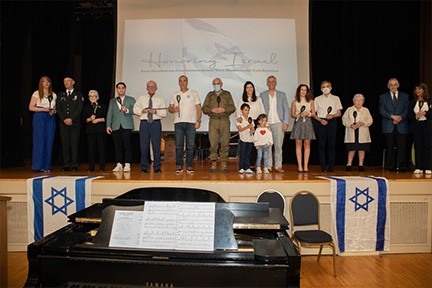 On Wednesday May 4, the Jewish community joined together at the Harrisburg JCC to honor Israel at the Jewish Federation of Greater Harrisburg’s Yom Hazikaron Commemoration/Yom Haatzmaut Celebration.

The event honored those who have fallen for the state of Israel and celebrated Israel’s 74th birthday. The program was emceed by Lt. Col. Shai and Orit Schul, with contributions from community members, IDF soldiers past and present, local clergy, and more.

Highlights of the program included performances by the Silver Academy students and a traditional candle lighting ceremony honoring community members who have shown dedication and commitment to the State of Israel. Honorees were:

Sam Brenner, in honor of his father Michael Brenner (z’l)

Jordan and Ortal Klein and family

Attendees also heard recorded remarks from Dr. Katherine Baker, whose son, Benjamin Blutstein, was killed in a terrorist attack in Israel in 2002. Katherine shared details of her son’s life and personality and reflected on twenty years without Ben.

“Who would Ben be?” she asked.  “Who would any of the soldiers and civilians killed for the state of Israel be? I don’t know. I wish I did.”

Rabbis Ron Muroff, Carl Choper, and Ariana Capptauber all participated in the Yom Hazikaron service, a somber period which honors all Israeli soldiers who have died fighting for the state of Israel and bleeds into the more festive Independence Day celebration, which begins immediately following Memorial Day.

A recording of the full program is available on the Jewish Federation of Greater Harrisburg’s Facebook page.