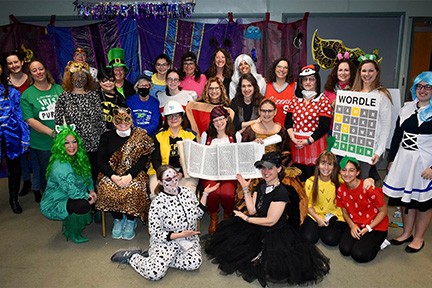 Although the Biblical book of Esther carries a serious message, thirty-one costumed women recently looked anything but solemn as they celebrated Purim by reading in melodic Hebrew at the 11th annual Women’s Megillah reading.

Held at the Jewish Community Center and attended by more than eighty women, the beloved traditional female reading highlighted a brave Jewish woman who did the right thing when it would have been easier to stay quiet and do nothing.

The happy Jewish holiday of Purim celebrates the salvation of the Jewish people from Hamen, an arrogant and wicked prime minister in ancient Persia. Hamen hated Queen Esther’s Uncle Mordecai because he would only bow to God. Hamen planned to destroy the Jewish people.

Esther had kept her Jewish heritage a secret from King Ahasuerus, her husband. She risked her life by telling him her ethnicity and asking him to save the Jews. He did and Hamen and his sons ended up being hanged on the gallows built for Mordecai.  Purim celebrates Esther’s courage with the reading of the Book of Esther, the wearing of costumes, the playing of games, and whimsical fun.

“We had more readers than ever this year, including five new ones,” said Marian Frankston, who coordinates the annual Women’s Megillah reading. “They came from every congregation and ranged in age from twelve to eighty-plus. There was a lot of ruach (spirit) here today. It was just wonderful.”

Frankston, dressed as Batwoman, said that last year’s program was held via Zoom. She said the women seemed delighted to be back in person.

That was obvious during the hour-long reading and the brunch that followed.  Readers and audience alike came dressed as heroic, eccentric, and creative characters: a butterfly and a bowling pin, a construction worker and a cowgirl, and everything from a mermaid to a Wordle game.

The Megillah reading, performed in Hebrew, blended attentive listening and loud levity. Readers came to the podium before a colorful backdrop and a “Happy Purim” sign. Flanked by two gabbai, women there to assist with the reading if necessary, participants began.

The styles and sounds of the readings differed, some in alto, some in soprano, some done quietly, and others read dramatically with inflections. The hours of practice of the difficult Hebrew words – without vowels or punctuation – paid off. No reader stumbled while giving her reading of the Hebrew text in a cadence all her own.

The readers sashayed forward in their costumes: Eva Siegel, as Minnie Mouse, Samara Sofian as a Dalmatian, and Carol Ressler as a tiger, to name a few. Some mother-daughter combinations also read: Mandy Cheskis as Queen Esther and daughters, Devorah, as a minion, and Rena, as a bowling pin; and Bonnie Peisner as a pineapple and her daughter, Emily, as a strawberry.

The audience listened to their readings in respectful silence until the despised name of Hamen was said. Then, in time-honored Jewish tradition, they booed, hissed, and shook noisemakers known as groggers to obliterate his name.

Lisa Foer, a reader dressed as Wonder Woman, said she felt the ruach in the room.

“I was in awe as each woman came up for her reading,” she said. “They read at different speeds, some melodic, some dramatic, and each with a different voice.” She said that she loved the community feeling in the room.

Holly Engelman noted the unity of women of the different congregations and generations coming together to read.

“Today, we were empowered and able to connect with our heritage through the text,” she said. “Esther is an example for all of us - she spoke up when her own safety was at risk. She was afraid, but she did it anyway. That’s what we have to do.”