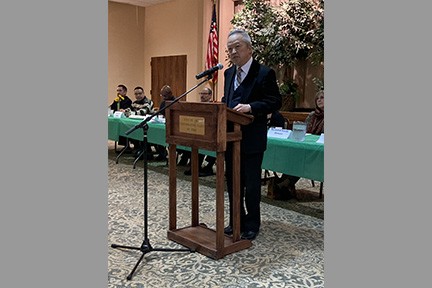 Refugees would have less red tape and more red carpets if folks at the recent 10th annual Freedom Seder at Beth El Temple had their way.

“Refugees are presents from God,” said Dr. Truong Phuong, International Service Center executive director, as he set the tone for the special Passover celebration which united 100 Jews, Christians, Muslims, Baha’is, and those of other faiths and backgrounds from across the community.

Guests followed the Seder using a special Haggadah, a booklet detailing the Passover story as pertaining to the Freedom Seder theme.

Rabbi Ariana Capptauber told participants that on Passover, Jews tell the story of their ancestors’ journey from slavery in Egypt to freedom so they can appreciate their own freedom. She said that the Haggadah tells people that in every generation, one must see oneself as though they personally experienced slavery and were brought forth from Egypt.

“In our own day, when people flee the dangers of war and oppression in their homeland, they often endure a period of wandering and uncertainty before they are able to make a new home,” the rabbi said. “It is our duty as an interfaith community to follow in the divine footsteps and care for these people until they find new homes.”

The Seder included traditional and contemporary questions, stories of and from refugees, and traditional Seder practices such as kadesh (blessing of wine), yachatz (breaking of the middle matzah), maror (recalling the plagues) and Matzah (naming the symbols of Passover).

Guests enjoyed a baked salmon dinner after sipping grape juice in lieu of wine, breaking and eating matzah and sampling the bitter maror - horseradish representing the bitterness of slavery - and charoset, the sweet apple and nut treat which represents the mortar Hebrew slaves in Egypt used to make bricks.

Tables were decorated with sunflowers, the national flower of Ukraine, in recognition of the more than 4 million Ukrainians who have fled their nation and become refugees since Russia’s invasion began on Feb. 24th.

During the evening, Karen Gatling led the crowd in singing spirited versions of “Let My People Go,” “We Shall Overcome,” and “Lift Every Voice and Sing.” Thaddeus Gatling accompanied her on the keyboard.

Phuong discussed how the Market Square Presbyterian Church and others welcomed refugees from Vietnam, Cambodia, and Laos since the 1970s. He said that during the surge of Afghan refugees last summer, “we took a leap of faith” after not engaging in resettlement work in thirty-five years.

“In November, our first Afghan refugees arrived in Harrisburg,” he said. “We got overwhelming support from the community. We have helped thirty-nine families with 119 members ranging from four months to seventy-three years. We overcame challenges thanks to the compassion and good support of this community.”

He especially praised Capptauber, a descendant of Holocaust survivors. Capptauber first helped her congregation collect household items, clothing, and food for refugees, then welcomed a refugee couple and their four children to live in an apartment in her home.

Steve Schauder, Jewish Family Service executive director, says that the agency has been working tirelessly to help refugees in need.

“We’ve now accepted thirty-four Afghan refugees in Harrisburg,’ he said. “We will be accepting sixteen more in the next two weeks.” He stated that finding housing for refugees remains one of the biggest challenges.

Catholic Charities has helped refugees for more than forty years with resettlement, employment services, and English as a Second Language classes, said Sara Beck, coordinator of the ESL program.

Freedom Seders date to April 4, 1969 - the first anniversary of the assassination of Dr. Martin Luther King and the third night of Passover that year. Freedom Seders inspire Jews, African Americans, and others to reflect on the meaning of freedom of slavery from Biblical days to the present day.

“May their come a day when America is a nurturing, caring, and gracious place for all to live as members of the beloved community, where love and trust trump over fear and hatred,” said Rev. Kim Wadlington of Market Square Presbyterian Church. “We thank the Almighty for a safe place to call home.”

As the evening drew to a close, guests commented on this special Seder.

“It’s an event I’ve grown to cherish,” said Jenn Ross, Jewish Federation of Greater Harrisburg CEO. “It was great to be back in person and see so many friends from the interfaith community.”

Behzad Zandieh, who fled Iran when he was sixteen to escape religious persecution as a Baha’i, said his faith teaches that the earth is one country and mankind is the citizen.

“So, anywhere I go in the world, I am at home and not a foreigner,” he said. “Tonight was perfect - many shared their personal experiences of coming to a land they knew nothing about and making it their homeland.”