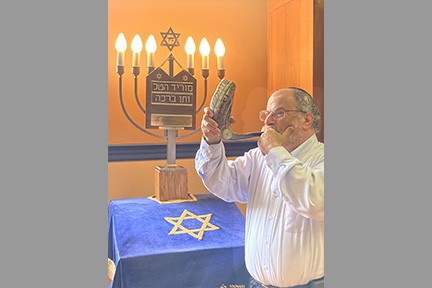 When Ellis Rosenberg sounds the shofar at Kesher Israel’s Rosh Hashanah services on September 6, he will be focusing on a new beginning.

“The shofar wakes us up figuratively,” said Rosenberg, who has been performing the tradition at Kesher Israel Congregation for forty years. “With God’s help, the sound of the shofar will steer us in the right direction. We are looking for God to help us because we need all the help we can get.”

This year, he said, he hopes that “we as individuals and as a community do what we’re supposed to do to make COVID-19 disappear as quickly as we can.”

The piercing sound of the shofar may do more than call Jews to celebrate Rosh Hashanah this year. Sixteen months into the COVID-19 pandemic which changed life as most people know it, the call of the traditional horn also seems to symbolize hope and a new beginning to Harrisburg-area Jews this year.

The shofar, a ram's horn trumpet used by ancient Jews in religious ceremonies and as a battle signal, is blown at various points of the Rosh Hashanah services and later to conclude Yom Kippur.

The shofar has four sounds: tekiah, a long, loud blast calling people to attention; shevarim, three broken blows which sound like crying; teruah, nine or more staccato rings serving as a wakeup call to the new year; and tekiah gedolah, a great blast played at the end of the Rosh Hashanah service. Rosenberg said that all four sounds are important.

“At Kesher Israel, we have a tradition of having 100 sounds of the shofar on Rosh Hashanah,” he said. “Sounding the shofar is meaningful to me even after all these years. On Rosh Hashanah, I get emotional when I do it because I am a representative of the community. My hope is that I do it well.”

Rosenberg, who spends the weeks leading up to the services practicing on his shofar, said that shofars are quite different than trumpets. “Sometimes your mouth gets swollen. Sometimes, you may not get a sound out. I always have a backup shofar with me on Rosh Hashanah.”

He also sounds the shofar for one long note after nightfall on Yom Kippur to mark the end of that holy day. He said that in most years, the congregations comes together for a meal after the Yom Kippur fast ends, though that is not planned this Rosh Hashanah which falls during the current surge of the pandemic.

At Chisuk Emuna, Gerald Gorelick thinks of community when he hears the shofar.

“The first time a shofar is mentioned in the Torah is when we stood at Sinai and heard the sound,” he said. “Standing together in community is fundamental to our faith, our history, and our future. We hope that many of us will be together for this holiday in our synagogues.”

Gorelick said that Chuck Kline sounded shofar at Chisuk Emuna for about seventy years before retiring from the job. This year, Rabbi Jonathan Milgram from Teaneck, New Jersey, will perform the ritual at Chisuk Emuna.

At Temple Beth Shalom, Ira Beckerman sounds the shofar, calling it an honor to do so. Beckerman, congregation treasurer, uses his school days experience in playing the baritone horn to help with the shofar.

“The method is the same but the shofar mouth opening is much smaller,” he said. “I bought a modest shofar to work with and to learn.  It is a lot easier to become familiar with one shofar as they vary widely in size and ease.”

The trick, he said “is to take a zen approach and especially not to overblow. It seems everyone tries to set a world record for length of time for the final tekiah gedolah.  That’s not for me.”

Rosenberg will chime the shofar for Kesher Israel’s indoor and outdoor Rosh Hashanah services, where participants will wear masks and socially distance. He said that last year, he also blew the shofar, which he called the highlight of Rosh Hashanah services for many Jews, outside at the Jewish Community Center for people not comfortable with going to other services.

Asked how he got into the practice, Rosenberg laughed.

“After my father died, my brothers and I were at a service and there was nobody sounding the shofar,” he recalled “I said to myself ‘how tough can it be?’ So I picked up the shofar and made a rudimentary sound with it. Shortly after that, the person who sounded shofar for eighteen years asked if I would like to learn how to sound it and learn about the laws and traditions. I said ‘OK’ and was planning to be his backup.”

Shortly after Rosh Hashanah that year, that man told Rosenberg that he was moving away – and Rosenberg has been sounding shofar at Kesher Israel ever since.

He said that while visiting his youngest son and family in Israel, “we went shofar buying. My son In Israel sounds shofar in a synagogue in Jerusalem so our next generation is doing it, too.”