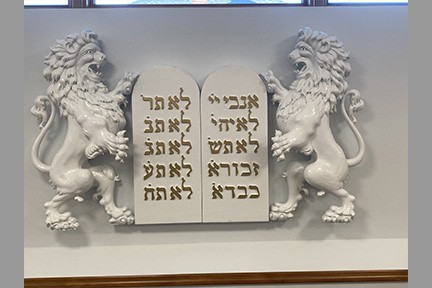 After spending seventy-two years in its majestic shul on North Third Street, Kesher Israel has moved seven blocks uptown, to a new home that helps it live up to its name.

The Orthodox congregation, whose name translates to “connection”, moved from 2500 N Third St. to 3200 N. Third St., a smaller, but more practical building.

The cavernous older shul, Kesher Israel’s headquarters since 1949, had a sanctuary which could hold 800 davenners. It’s new home, the former Riverside United Methodist Church, allows this historic shul to provide its members - 125 families and individuals - with a rich spiritual and social environment. The location is “in the heart of many of our members’ backyards,” said Barry Gordon and Oleasa Salkin, who co-chaired the Kesher Israel construction committee.

“We are bringing our traditions to a modern day building,” said Gordon, a former synagogue president and decades-long member.

In the fall of 2019, the congregation voted to purchase the former Methodist church building at 3200 N. Third St. for $176,000. The older synagogue building is in a sales agreement with a local investment group.

The new location, an L-shaped red brick building built in 1956, is closer to the Jewish Community Center and Chisuk Emuna Congregation. More importantly, it’s in walking distance to the homes of most Kesher Israel members. Observant Orthodox Jews do not drive or ride in vehicles on the Sabbath or on holy days, and the new, closer location makes the journey to services more manageable.

Kesher Israel’s new shul has 11,600 square feet which includes the original space and new construction. Its design offers a more practical, flexible home for the congregation, whose members range from infants to near-centenarians.

Pyramid Construction oversaw the work on the building. That included extensive renovations, infrastructure work, updates to the heating, ventilation, and air conditioning with proper air exchanges and virus protection in the duct works, new windows and doors, smart lighting, and construction of an addition for a new sanctuary.

“When we bought the building, we had to deal with bad landscaping and walls that had not been waterproofed,” Gordon said. “We had to make trenches around the building and put in a rubber membrane to get water away from the building foundation.”

The lower level of Kesher Israel “is for our everyday uses,” Gordon said, giving a tour of the offices, conference rooms, downstairs social hall, food prep area, utility room, and inviting prayer chapel with six pews from the old Kesher Israel building and a mechitza to separate men and women.

The sanctuary and community room upstairs have flexible space and a foldable wall to separate the two spaces depending on the event. The sanctuary, with the Holy Ark from the previous building, features large picture frames, each having twenty stained glass window panels depicting everything from the scales of justice to the Star of David.

The sanctuary has bright LED lights which can be dimmed, very comfortable chairs for congregants, and beautiful cloth-covered tables.

“It’s time for us to use our synagogue as a gathering space for our congregation to be with each other and with the community,” Gordon said.

The new shul has a large child care room, a state of the art security system, a fire alarm system, and internet access. It also has electronic screens - one type serving as an announcement board and the other kind as an electronic Yahrzeit, which honors deceased Kesher Israel members with their names and lights marking the date of their deaths.

The congregation spent $1.5 million on the purchase and renovation of its new home, paying for the project with a capital campaign, which has reached 75 percent of its goal.

Kesher Israel was founded in 1902 and spent its early years in the area of Third and Briggs streets. When the Commonwealth wanted the congregation’s original site decades later, the congregation moved to uptown, where many of its members had moved.

“Now, we are in a new building again,” Gordon said. “We can grow into this one, too.”

Learn more and see photos of the new building at www.kesherisrael.org.