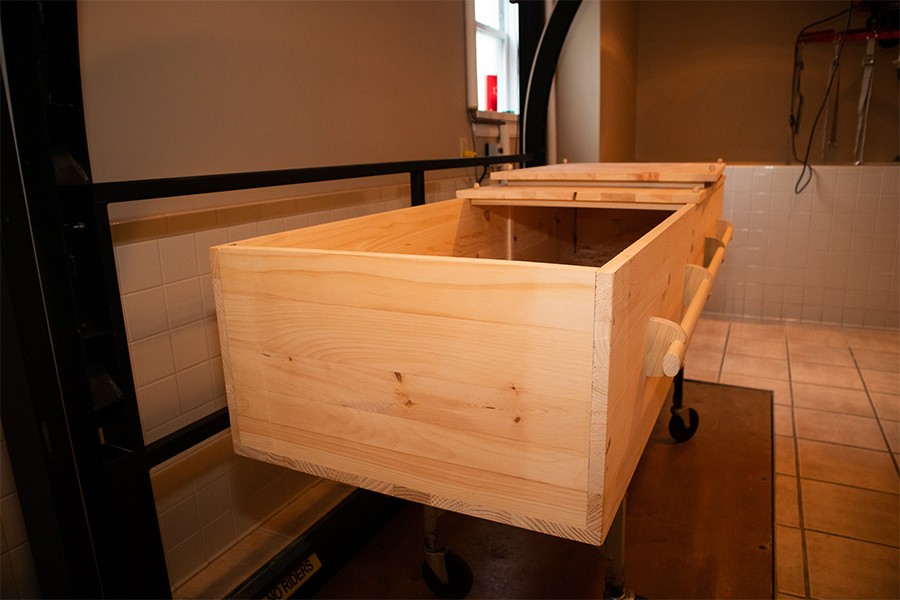 Although most Jews have no trouble discussing Jewish traditions, there’s an almost palpable reluctance to talk about death and burial customs.

No wonder. Jews, like society as a whole, often seem reluctant to face the finality of death. Yet when life ends, observant Jews need to ensure that the bodies of their loved ones are prepared for burial according to traditions.

Here’s where Chevra Kadisha enters the picture. Chevra Kadisha, which means burial society, is an organization of Jewish women and men who protect corpses from desecration and do the ritual cleaning and dressing of deceased Jews for burial according to tradition.

That point person calls at least four members of the congregation’s Chevra Kadisha team, with men taking care of men and male children and women taking care of women and female children. These trained volunteers then meet at a special house which Hetrick Bitner Funeral Home owns for the performing of these prescribed Jewish rituals.

“Jews don’t do embalming or cremation,” said Stuart Brenner of Jacksonville, Florida. Brenner served in the Kesher Israel Chevra Kadisha for decades before moving to Florida two years ago, where he continues to serve in a Chevra Kadisha,

“We also try not to have autopsies unless the local authorities need that done,” he said. “We don’t want to deface the body or tinker with the totality of the individual.”

Brenner said that Jews treat the dead with respect and often bury them within 24 hours of death so that bodies don’t decay before burial.

Susan Leviton, member of the Chisuk Emuna’s Chevra Kadisha since 1984, said that each person is prepared for burial with dignity and beauty.

“Taking care of the dead is one of the highest commandments in the Torah,” she said. “Abraham purchased a cave to bury his wife, Sarah. New Jewish communities traditionally purchased land for a cemetery before finding land for the synagogue.”

Leviton said that Chisuk Emuna’s tradition is to work silently around a gurney holding the corpse. The team washes the body carefully, allowing the water to drain from the gurney through a pipe into a drain. They clean the nails and comb the hair, putting any loose hair into a cloth to be buried with the body.

Orthodox tradition involves using a hydraulic lift to guide the corpse into a tub similar to a whirlpool for cleaning, Brenner said.

Leviton said that local synagogues have their own cemeteries with chapels where services are held, although large funerals are held in synagogues. After the service, psalms are read as the casket is taken to the grave.

“The group accompanying the casket stops seven times between the chapel and the grave in recognition of the heaviness of heart we feel,” Leviton said. “The casket is lowered into the ground. Everyone has an opportunity to participate by putting shovels of dirt on it.”

Leviton and Brenner agreed that preparing bodies for burial is physical, spiritual, and emotional. They called the task a special mitzvah because the dead person cannot return the favor.

“I always imagine what the people were like when their parents held them as babies,” Leviton said. “In a way, it’s like caring for a baby. We wash them and dress them. Then we place them gently into the coffins, sprinkle some earth from Israel on them and send them to go in peace to their maker.”

For more information on participating in the mitzvah of Chevra Kadisha, contact your synagogue.