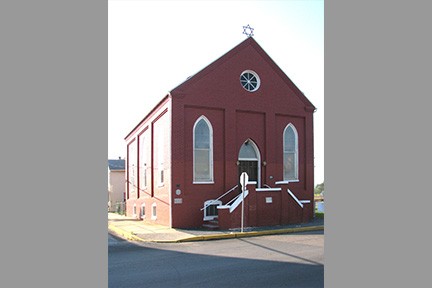 Although it may not have a rabbi, a religious school, or its own cemetery, Historic B’nai Jacob has a rich heritage and a warm, welcoming congregation second to none.

In the early 1900s, Middletown had about twenty Jewish families who came from the same region in Lithuania and worked as peddlers, shoemakers, junk dealers, tailors, and grocers. They felt at home in Middletown, which had the same atmosphere as their old hometowns.

The mostly Lithuanian immigrants chartered B’nai Jacob in 1904, first holding services in the home of Yoel and Ida Hervitz. In 1906, they built the synagogue building that still stands in Middletown, conveniently located on the main line of the Pennsylvania Railroad.

B’nai Jacob, a simple but stately Old World synagogue, was built from bricks hauled on horse-drawn wagons from the Royalton Shale Brick Company nearby. The brick exterior includes recessed panels with pointed arch leaded stained glass windows and a Star of David. Four years ago, the shul dedicated its rebuilt steps and façade.

The congregation still sits in pews that once graced the Dauphin County Courthouse. B’nai Jacob still has its first Torah, bought by Leah Krauss Z’l.

Larry Kapenstein, the congregation vice president, treasurer, and shamas, says that “things can happen to an older building.” He said that the congregation keeps up with clearing snow and ice, mowing grass, repairing the chimney, and improving lighting and security using a trust fund for maintenance.

Arthur Berman Z’l, Leah Krauss’ grandson and son of Maurice Berman (B’nai Jacob’s first secretary/treasurer) a few years ago reminisced with the Community Review about his fond memories of the shul. He called it “the scene of all social activity” for Middletown Jews.

“The Jews in Middletown were quite observant and very close to the shul,” he said at the time. “Activities centered around the Jewish holiday calendar. On Saturday afternoons, the women would come to our home to visit my mother. I remember a visiting rabbi from Palestine. I can recall the excitement of the evening we burned the mortgage.”

Bruce G. Baron, B’nai Jacob president and secretary, said that the congregation has about 150 members, many from the Middletown, Harrisburg, and Elizabethtown areas, but some as far away as Michigan, Florida, and New Jersey.

“Those who attend are mostly older people,” he said, “but we have a few kids who have come with them and been with us on Zoom. We have been told that people like the feeling of welcome at our shul. We try to make it possible for people to participate in our services at their own level without judgements.”

Dr. Edward Beck, a B’nai Jacob board member and an “on-and-off” congregation member since 1972, said that his children grew up there and that he had his Bar Mitzvah there eight years ago at the age of 67. “It’s a wonderfully heimish and unique congregation,” he added.

B’nai Jacob conducts some parts of services in English and uses a standard form that people can learn over time, Baron said. Marc Bluestein of Philadelphia, Kapenstein’s brother-in-law, has been leading the services and has made the service accessible on Zoom.

Like many area synagogues, B’nai Jacob turned to Zoom for services during the COVID-19 pandemic. Baron said this resulted in greater attendance at the monthly services -- and larger donations.

B’nai Jacob holds 45-minute services the first Friday night of each month. In non-pandemic times, this is followed by an Oneg Shabbat in the downstairs social hall, typically sponsored by one or more families. The shul also is known for its holy day services, Veterans Day services, and various social events.

Kapenstein said that families with ties to B’nai Jacob often keep in touch.

“A lady from Australia contacted me, saying she was researching her family history but had a missing link she thought was connected to the wife of our first president, Eliezer Zacks,” he said. “We communicated and found that the wife’s maiden name was Proser. The woman was head over heels that we were able to help her complete her family tree.”

A few years ago, Kapenstein received a package simply addressed to “the temple on Wood Street, Middletown, Pa.” The package arrived not long after the attack at the Tree of Life building in Pittsburgh, making him “more than a little nervous.” He called the Middletown police.

“When they opened it, we found a book of our history,” he said. “A lady had been working on a thesis about the history of our synagogue, then fled a domestic violence situation in the middle of the night. She sent us the thesis and said she hoped we could use it. She had good research.”

Moving forward, Baron said that the shul board will soon meet to discuss reopening the shul to in-person services and including Zoom/Webcasts for dual participation.

“We are fortunate to have some younger, tech-savvy members who can help with that,” he said. “The spirit of our congregation is beautiful.”