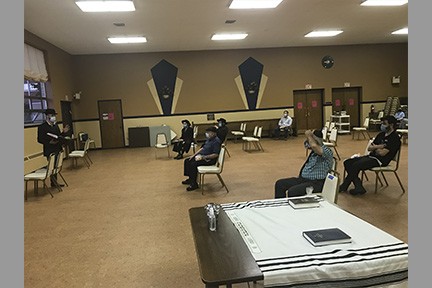 A rabbi who for the past year has led his congregation through the challenges of the COVID-19 pandemic says Jews celebrate Passover and the Exodus story in good times, as well as bad.

“Passover, at its core, is not a feel-good story about how G-d redeemed the Jews and everyone lived happily ever after,” said Rabbi Elisha Friedman of Kesher Israel. “It’s a story of how He freed us from Egypt and gave us a mission to be His people.”

Passover commemorates the liberation of the Hebrews from slavery in Egypt and the passing over of the plague that would have killed their firstborn sons.

Rabbi Friedman noted that Jews not only have celebrated the Exodus story in good times but also in times of extreme suffering and duress that match and go beyond the current pandemic. He said that the pandemic is a completely different challenge than slavery in Egypt.

The Exodus story, he said, “is about the ironclad relationship between G-d and the Jews, through whatever tragedies and suffering Jewish history has brought. We are G-d's people and we celebrate that. So that's why we celebrate the Passover story, regardless of the context of our lives at that point.”

Passover is a holiday that is typically celebrated with family and community, with the festive meal rife with symbolism, the reading of the Haggadah, singing of special songs, drinking four glasses of wine or grape juice, and more.

“I expect many of our members will celebrate Passover (this year) similar to how they have in the past, although with much smaller Seders,” Rabbi Friedman said.

He continues to note that large gatherings are not a requirement of the holiday. “While family and guests are an important part of the Seder, in the Orthodox tradition the Seder is primarily about performing the many commandments of the night: matzah, maror, four cups of wine, telling the story of the Exodus, and some others. So despite the many challenges of this year, the basic structures of our Seder remain consistent.”

Consistency has been a theme of Kesher Israel since the pandemic began a year ago, the rabbi said. He said that the shul was closed for two months at the start of COVID-19.

“Kesher Israel has been holding in-person services since May of last year,” he said. “We had to briefly close again for about two weeks during the second wave this past November, but otherwise we have been holding our daily schedule of services twice a day throughout the pandemic.”

He said that summer services mostly were held outdoors but gradually the congregation moved back into the synagogue.

“Services are held in the social hall which allows for better social distancing and has better ventilation,” he said. “All attendees must social distance and wear masks at all times.”

Migrating to Zoom would have been difficult for the Orthodox synagogue. “We don’t use technology on Shabbat and most holidays,” says Rabbi Friedman.

He said that the congregation “strenuously wanted to avoid moving our synagogue experience to Zoom because it can be hard to shift back from that model once you make the jump.” He mentioned that many holiday programs have morphed into a hybrid model where viewers can join live, in-person programming from home on Zoom.

The synagogue’s commitment to live services has allowed it to maintain a consistency as an in-person synagogue, says Rabbi Friedman. “Although most of our membership has not been able to join us in-person throughout the pandemic, as people get vaccinated more and more will resume attending.”

Kesher Israel members showed early in the pandemic how strongly they felt about attending the synagogue in person, the rabbi said. “We had a large percentage of members who were not willing to close down the synagogue indefinitely.”

Over the past few years, Kesher Israel has experienced a growth in young members. Rabbi Friedman said that the pandemic gave them the opportunity to take on more responsibility at the synagogue. He also said that during the pandemic, synagogue services have been disproportionately attended by the younger members.

“This has been a nice way to recognize the strides we have made in growing that population at our synagogue,” he said. “If not for our growing group of younger members, we would not have been able to continue holding services steadily all these many months,” he said.

In addition to his synagogue’s operations being largely in-person, Rabbi Friedman has been podcasting, putting up videos on YouTube, and experimenting with other forms of social media.

“My podcasts deal with complicated subject matter and try to make complex Torah discussions more accessible, so they're somewhat niche,” he said. “The YouTube videos are shorter and more accessible. Without our trusted KI technology expert, Moshe Bendavid, who runs Alenu Media, I would not have gotten any of this up and running.”

The rabbi predicted an explosion of Jewish programming and resources available on the internet in the years to come.

“If not for COVID, I and many others would not have been inspired to increase Judaic resources on the internet,” he said. “So this will be a positive legacy of the pandemic. I see my podcasts, videos, and any other online projects I work on in the immediate future as part of this trend. This perspective is in line with Jewish tradition, which focuses not only on physical salvation, but also the spiritual growth which comes from adversity.”

Ultimately, the rabbi said, he hopes to get Kesher Israel some name recognition “in the busy world we live in with the hope that the more people who know we're here, the more people will consider joining our community. The whole experience has been intellectually engaging. I'm looking forward to seeing where it goes in the coming years.”

He emphasized that celebrating Passover is not only about the physical exodus from Egypt and freedom from slavery, but more centrally about becoming the Jewish people with all the responsibility and opportunity that entails.

Freedom on Passover means, primarily, freedom from the Egyptian mindset and value-system, rather than relocating from a painful living arrangement, Rabbi Friedman said.

“During this season, we celebrate how we went from a nation of slaves into one on the spiritual level of being ready to accept the Torah,” he said. “In the same way as we emerge from the pandemic, it is important for us to not solely focus on how things improve physically, but on how we have grown through this, spiritually. It is an opportunity not only for things to go back to normal, but to resume normal life with renewed commitment and dedication to the values we hold dear.”