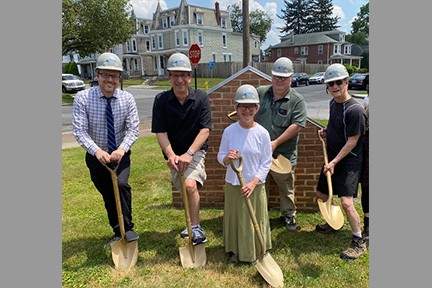 Kesher Israel Congregation is on the move.

After purchasing the former Riverside United Methodist Church at 3200 N. 3rd St. in 2020, the congregation broke ground last month on construction that will transform the building into its new home.

The two-level building will be enhanced with new heating, air conditioning and air movement systems, lighting, bathrooms, offices, and more.

“Our idea is to create a secure, livable, spiritual space,” says Barry Gordon, co-chair of Kesher Israel’s Construction Committee. “The building will look a lot different by the time we’re finished.”

New construction on the upper floor will build the sanctuary and social hall. Rather than pews, sanctuary seating will consist of chairs that can be easily added, subtracted, or rearranged.

“One of the things the Construction Committee was adamant about was that we create as much flexible space as possible,” Barry says.

Both levels will be handicap accessible and will feature a high-end security system. Total cost of the project is estimated at $1.5 million, with nearly a million dollars already pledged by KI members, community members, and many out-of-town friends and supporters.

But the fundraising continues. The synagogue hopes that many people in the community who are connected to KI through family members, who grew up at the synagogue, who have warm feelings for the KI community, or that value the presence of an Orthodox synagogue in Harrisburg will help support the project.

“We could still use help to complete the capital campaign for the project,” says campaign chairman Dan Grabenstein. “We are grateful to all our supporters so far and everyone else who will help us get across the finish line – everyone’s support is important and appreciated.”

The congregation’s new home, a building which had been on member’s radar for decades, is a better fit for the modern-day congregation - a smaller, more Uptown-based population than the one that began convening in the previous building in 1949. The synagogue’s history stretches all the way back to 1902, when the community resided toward Downtown Harrisburg.

“This has always been our ideal location,” says Rabbi Elisha Friedman. “It will allow people to come in many more times each week – I assume it will be packed all the time.”

Incoming Congregation President Ben Altman says that the building is “more efficient” for the congregation and commended the 11-member construction committee for its work in creating a suitable use of the smaller area.

“Most of it was done by committee, which for many months considered how to best use the space,” Ben says, with about 80% of the footprint accounted for, and plans for some lower-level areas still being finalized. “It’s been several months to get to this starting point.”

That “starting point” included an ice cream social and town hall meeting in June, when the congregation ceremonially broke ground on the construction which is expected to last several months. Barry says that they hope to be finished by Chanukah, though the end of the year is also a reasonable target.

While much of the project consists of renovating the building from the ground up, there will also be touches of the traditional. The congregation will be transferring the Aron Kodesh, the Holy Ark where the Torahs are housed, to the new location.

“We’re taking something very important to our congregation, bringing something old to something new – you have to bring tradition along,” Barry says, noting that the guiding intention throughout the process has been to create a more tight-knit, actively involved congregation. “We’ve gone from a much larger space, to a much more intimate setting for prayer services, and that will be a big help in building community.”

For more information and updates on building progress, details, and to give in support of the project, visit www.kesherisrael.org.