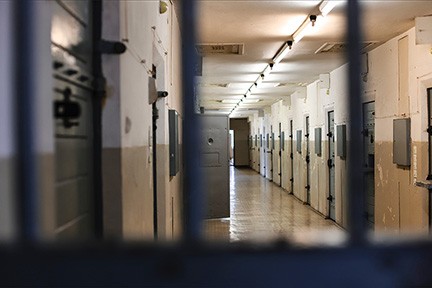 Jewish prisoners especially appreciate the Passover story of Moses leading the slaves out of Egypt to freedom.

While most Harrisburg-area Jews will attend Seders in homes or synagogues next month, about 20 Jewish inmates at the State Correctional Institute in Camp Hill will attend a Seder behind bars.

This year’s Pesach, which starts at sundown April 19th and concludes on nightfall April 27th, will be observed at the prison just as it has for the past two decades, said Tonya Heist, prison spokeswoman.

“It is very important to inmates when they can learn and maintain a robust spiritual life,” Heist said. “The Jewish inmates appreciate the diligence and attention shown to call-outs and program attendance rosters. They value Rabbi Carl Choper and his continual efforts to support the community throughout the institution.”

Choper, a community rabbi in Harrisburg and president of the Interfaith Alliance of Pennsylvania, spends time counseling and getting to know the inmates. Heist shared some of their comments in which the inmates called Choper non-judgmental, positive, friendly, and scholarly.

Heist said that the prisoners are given Haggadahs, the books which includes the highlights of Exodus. Prisoners participate in the readings with a rabbi or other Jewish leader. Heist said that candles are allowed to be lit during the Seder.

Although the tables aren’t as fancy as in some Seders – Styrofoam plates and plasticware must be used for security reasons – the food is kosher and follows the Seder ritual: matzah, roasted egg, salt water, fresh parsley or a celery stock, charoset, ground horseradish, and roasted shank or neck bone.

Heist said that four glasses of kosher grape juice are substituted for the wine.

There’s something bittersweet about a Seder in prison. After all, Passover celebrates liberation from captivity, something the prisoners long to experience.

Some prisoners hold back a tear at the Haggadah line “Tonight we are all free men.” Others look to the outside world longingly at the traditional exclamation “Next year in Jerusalem!”

Heist said that SCI Camp Hill offers religious services to those who want them.

“We have weekly Jewish studies and a Shabbat service led by the contracted rabbi or volunteer,” she said, adding that the prison also offers celebrations of Rosh Hashanah, Yom Kippur and other Jewish holy days.

She said that prison officials hope that “through positive spiritual engagement, the lives of inmates will improve, and that when they return to their families, they will impact their loved ones and society for the better.”

WANT TO HELP? Temple Beth Shalom is raising funds to assist Jewish inmates in attending the Passover Seder and in supplying yarmulkes. You can contribute to the fund by check payable to Temple Beth Shalom, marked for the Camp Hill Prison Fund, and sent to P.O. Box 346, Mechanicsburg, PA 17055.