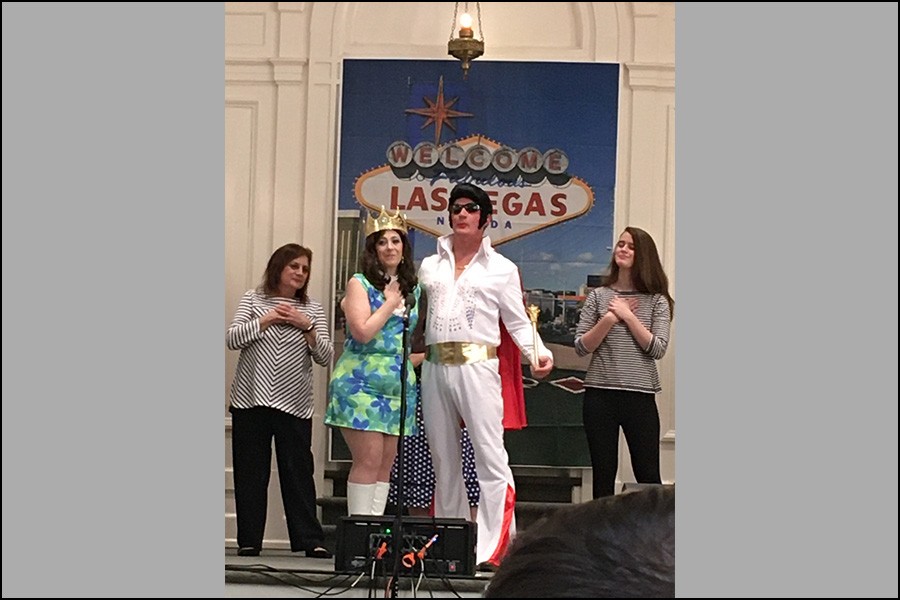 Some Jews chant the Megillah. Others read it in a singsong voice.

A group of fun-loving Temple Ohev Sholom members crooned it, sang it, and even danced it in a style that would have been right at home at Elvis Presley’s Graceland, but seemed boldly unusual and wonderfully hilarious for a Harrisburg synagogue.

All Shook Up, the Elvis Megillah and Ohev Sholom’s 11th annual Purim spiel, celebrated Purim, a joyful Jewish holiday which observes the salvation of the Jewish people from Haman, an arrogant and wicked prime minister, in ancient Persia.

Directed by Russ Minnich and Ed Shapiro (who also gave comical performances as King Ahasuerus and a wise man, respectively, in the production) and choreographed by Minnich and Patti Hivner (also in the program), the Elvis-styled Purim appealed to young and old alike. Sarah Brown, one of the actresses, noted that “We had a lot of fun with it.”

So did the audience, especially this reporter who couldn’t stop smiling, laughing, and keeping time as the cast sang everything from “Love Me Tender” to “Don’t Be Cruel” to “Can’t Help Falling in Love” with a Jewish theme.

The Ohev Sholom sanctuary took on a jovial atmosphere contrasting its ten dignified stained glass windows. American and Israeli flags, and the eternal light.  A Las Vegas poster dominated the area in front of the ark. The actors and actresses, wearing costumes ranging from Elvis’ white studded jumpsuit to Hivner’s black leather jacket, added to the light-hearted atmosphere.

The story began when King Ahasuerus/Elvis made a grand entrance, his red cape fluttering behind him, his sideburns perfect, his hips swiveling and his voice rather sultry as he crooned “thank you, thank you very much” to his audience.

Soon, he was singing “Love Me Tender” to his golden scepter. Then, his trusted advisors, whom he called the “wise men” (Andy Brown, Dave Feldman, Marvin Kimmel and Shapiro) sang “Heartbreak Hotel.”

The king decided to throw a party, check out the women, and pick one as his queen, “as long as she’s not Jewish.”  Esther, played by Stacy Feldman, wanted to be queen but knew she had to keep her Jewish heritage secret from the king. Her Uncle Mordecai, played by Bob Wolff, said he just wanted a job.

Nancy Garner, in the role of the vivacious Vashti, and six other women carried teddy bears as they sang about them, then launched into a silly rendition of “Hound Dog.” The seven women completed in a beauty pageant so the king could pick a bride.

Each woman sang part of an Elvis song, including “Return to Sender” by Teresa Dorrite; “Hard Headed Woman” by Hivner; “Too Much” by Cassandra Rosenbaum, and “Suspicious Minds” by Nancy Garner.

Esther, wearing a brightly flowered short dress, white boots, and a headband, sang “Treat Me Nice.” The king was smitten and chose her as his queen. He gave her uncle his longed-for job of guarding the palace, noting that “Graceland is our summer home.” Mordecai proved his worth when he dispatched four assassins after they sang “All Shook Up.”

The king then searched for a “prime minister who is tough, ruthless, and can get me on the Ed Sullivan Show.” Haman (played by Aaron Krause) said he qualified but could only get the king on WITF. When the king named Haman as prime minister, the audience stomped their feet and booed to obliterate his name in the time-honored Jewish tradition

Soon, Haman declared that all Jews must bow to him or be hung from the gallows. Mordecai refused, saying he would bow only to God. The anti-Semitic Haman made plans to exterminate the Jewish people. Mordecai sang “Don’t Be Cruel, It’s So Uncool” to Haman, who gave an evil laugh, saying that he liked being cruel.

Queen Esther saved the day, telling her husband about her ethnicity and asking him to save the Jews. She tenderly sang “I Can’t Help Telling You I’m A Jew” to the tune of “Can’t Help Falling in Love With You.” The king agreed to save the Jews, saying “I have to do something about Haman,” as the audience booed at the name.

The king told Haman he planned to hang him on the gallows built for Mordecai for “tough love” adding “that you’ll be a better man for it.” As the hour-long performance ended, Shapiro led the cast in singing “Burning Love.”

Marjorie Sherman applauded enthusiastically. “I just loved it,” she said. “I smiled and clapped through the whole thing.” Rabbi Peter Kessler agreed, calling the performance “wonderful.”

The performers said they had fun too.

“I’m a drummer, a singer, and quite an Elvis fan,” said Minnich, wearing his own Elvis jumpsuit. “I’m in several bands. We play a lot of Elvis. He’s timeless. This was a fun way to do the Megillah. The cast had a lot of fun.”

Andy Brown said he can’t sing or dance but went out of his comfort zone for the program.

Even Krause, who played the hated Haman, said he had fun. “I’m the nicest guy in the world,” he said. “But I loved playing Haman and hearing the boos. Someone had to do it.”