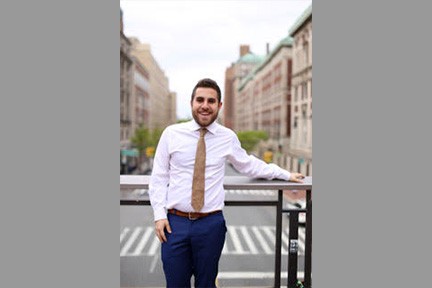 The Temple Ohev Sholom Board has hired Jason Graf to serve as the Director of Temple Ohev Sholom's Religious School beginning on July 1.  He takes over from Lillian Rappaport, who retired after a long and successful tenure.

Jason moved to Harrisburg in July 2019. He attended Columbia University and the Jewish Theological Seminary (JTS), where he earned two bachelor's degrees, one in psychology and one in Talmud. Jason is in the process of pursuing his master's degree in Jewish Education from JTS.

He has had extensive experience working in religious school settings both as a classroom teacher and directing religious school programming.
During the day, Jason works at Reading Plus, a reading intervention program for students in grades 3-12.  When not working, Jason loves to spend time outdoors with his wife Zeva.

Jason will be working with Lillian this summer as he transitions to the role and we work toward launching religious school for the fall.  Please join us in  welcoming Jason to the Temple Ohev Sholom family!   He can be reached at jason@ohevsholom.org.