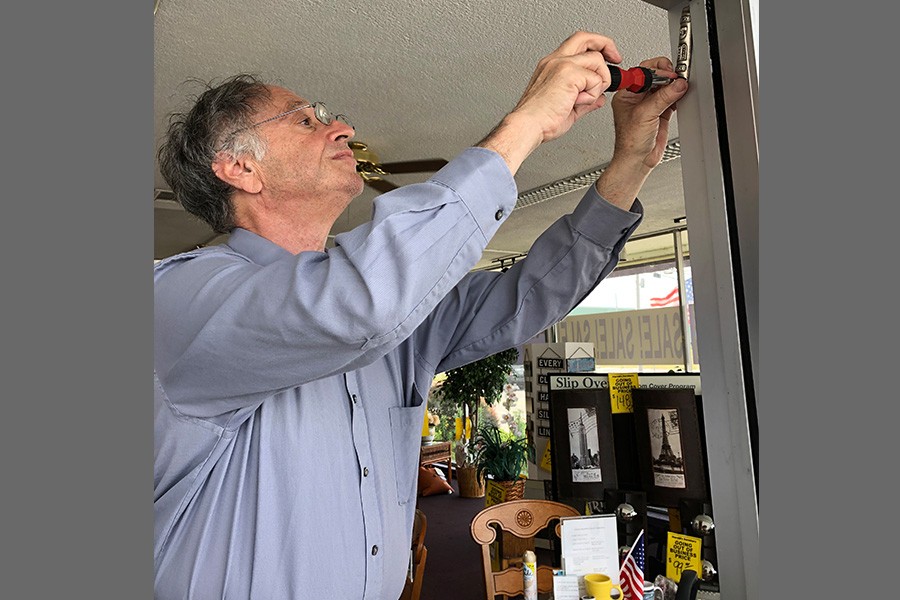 In a local restaurant under dimly lit ceiling lights, someone recognizes Stu Perlmutter from over an aisle and introduces herself.

“Hi,” she says. “I’ve always bought my furniture from you, I heard about your store closing, I just wanted to say thank you.”

Stu paused and acknowledged his former customer. He shook the conversation off politely, nonchalantly, as though being recognized publically is a regular occurrence for him (which it has been since his “going out of business” commercials aired on local television).

What is not regular for Stu, or for the Lebanon town altogether, is the closing of another visibly Jewish store in South Central PA, and not just any store, but Harold’s, Lebanon’s Oldest and Largest Furniture Store. As we meet over dinner and talk about aspirations for the future we also talk about what his family business’s departure means for the town.

“If you came out on a Friday night, it was hard to walk up the street - so many people.” I half listened, and half imagined what these beautiful small Pennsylvania towns looked like in their prime, animated with thriving, young families. Main streets glistening with post-WWII economic opportunity. Stu’s business, Harold’s, sold furniture to many of them. Even our synagogue is furnished with the hard work of his family members and employees.

Upon returning from World War II, Stu’s father, Harold, recognized that factories were slow to convert production from military goods to domestic ones. He remembered a small town with an ideal main street in Lebanon, PA from when he was discharged from the military. Thusly, Harold set up shop in Lebanon and began selling the items that adorn the homes of the Baby Boomer generation.

Harold’s uniquely bundled furniture into package deals for the whole house: living room, bedroom, and dining room together, at one low price. He also was the exclusive dealer for General Electric products, and quickly expanded into more space in 1959. He couldn’t have timed the market more appropriately for a retail business. Birth rates were up, housing was affordable, and people needed to fill their edifices with furniture. Harold’s was there.

There’s a social responsibility to operating a small business that elevates you from a faceless storefront salesperson to an avuncular town figure. Harold (and subsequently Stu) became that person, a pillar in the Jewish community, a leader of the local retail market, and a busy family man. During the wave of globalization that steadily eroded the local manufacturing jobs across the state, Harold’s continued to operate during the downturn. Under stressful conditions, with Stu’s forward guidance, the store expanded into office furniture, mattresses, La-Z-boy recliners, and even moved into its final prominent location, further down Cumberland County.

As a known Jewish person, Stu was often encouraged to be saved through a number of publications his customers left for him. Occasionally after services he would forward this literature to me with a jest, “Look rabbi, they’re giving me books.” I found it touching that these neighbors cared for Stu enough to think of him.

Through informal meetings at his office, I learned practical skills in communicating between Lebanon’s Jewish community and it’s Christian neighbors. I’m sure these interfaith work relations were a widespread phenomenon when the majority of Jewish businesses existed on Main Street, however today Harold’s was the last business left.

Last November, Stu gave the opening speech at our commemoration to the Pittsburgh Shooting, “We are here in Lebanon because you have invited us here,” he spoke to the town’s non-Jewish residents, “We are here as Jews because the good people of Lebanon allowed us.”

Like many second- or third-generation immigrants, Stu, a first lieutenant in the US Army infantry and graduate of Pennsylvania Military College, didn’t always expect to be running the family business. The American dream of being “anything you want,” often inspires us with foreign ambition, and Stu first worked as a sports writer in a Philadelphia suburb.

Stu’s commitment to his family was something that developed over time, something that was deeply motivated by the biblical injunction to honor thy mother and father. Ritualizing the closing of his family’s furniture business has given Stu the opportunity to forgive family members, make peace with the Jewish immigrant dream “to own one’s own business,” and get ready for the next stage of life.

One of the lifelong hopes that Stu’s mother held for her children is that they would one day preside over the congregation as synagogue president. The nachas a mother would schep knowing her son is the venerable head of the community is the stuff of Yiddish legend. With more time available for Stu in retirement, he can continue to fulfil the mitzvah of honoring one’s parents, by serving the congregation in ways he had always wanted.

Closing a business is a painful decision, and one that gets processed by the town and individuals together. In a Jewish light, to make Stu’s transition into retired life more fluid, we celebrated a business closing ritual that broadened the words of Havdallah. We added to the traditional prayer: Blessed is God who makes a distinction between work time and recreation time, between the phases of one’s life, and between now and retirement.