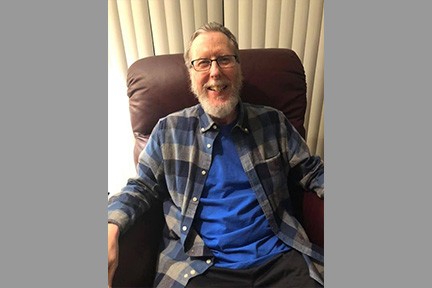 In February 2020, the coronavirus was just beginning to go global. Handwashing and sanitizer use was skyrocketing, but the words “social distancing” and “ face masks” were still unfamiliar.

Jewish Family Service was preparing for its premier event of the year, a lecture with renowned author Mitch Albom. The program was held at Beth El Temple on February 25, 2020 with a packed house.

“Had that event been scheduled for the next week, we probably would have had to cancel it,” recalls Barry Stein, then-JFS Executive Director. “We got in just under-the-wire.”

Shortly after the event, Barry and his wife Susie, flew to Florida to visit Susie’s 95 year-old parents. They got back to Harrisburg with no issues, though, by then, coronavirus seemed to be at the forefront of public conversation. Nonetheless, life went on as normal. Preparations were being made, but nothing drastic.

“We were just starting to talk at JFS about minimizing the number of people coming into the building,” Barry says.

Then the world shut down. Shortly after, Barry started feeling ill. Susie took his temperature and sure enough, he had a fever.

Still, he thought it would probably go away in a few days. He continued working throughout the week at a makeshift home office at his dining room table. “For several days, the doctor wouldn’t authorize me to go for a COVID test,” he says, recalling the shortage of tests available at that time. “Although, I began to cough, I wasn’t having trouble breathing.”

Eventually, as he got sicker, a test was ordered – it came back positive, one of the first confirmed cases in Dauphin County. By the time the test came back, Barry was already in the hospital. He wouldn’t return home until three months later.

Barry remembers his wife driving him to the hospital at UPMC Harrisburg.

“We went into the emergency entrance and when they realized there was a good chance I had COVID, they sent me back outside and in another entrance,” he says. “From then on, I don’t remember anything for the next seven weeks.”

Barry’s oxygen was critically low, and he was intubated the day after he arrived at the hospital. He spent six weeks on a ventilator. During this time, Barry’s family – who was only able to see him through virtual means - had to make many decisions about his care and treatment.

“We didn’t know the condition of his brain,” Susie recalls, noting that doctors were unable to run simple tests due to the metal pacemaker Barry had implanted a couple years earlier. “It was possible he could wake up, but in a very sorry condition.”

As it was still the beginning of the COVID crisis, doctors were learning how to deal with both the influx of patients and a new virus. Barry’s situation was incredibly dire.

“I had never imagined that I might be widowed in my 60s,” says Susie. “I didn’t have a script for that. I knew that he could die – but I never came to the point of thinking that he was going to die.”

The Steins say that Dr. Stan Lewin, a community member and retired cardiologist, helped the family make informed decisions, ask the right questions, and bridge the gaps between halachic and medical considerations.

“Stan made himself available to us 24/7,” says Susie. “It absolutely helped.”

After numerous procedures and six weeks on a ventilator, Barry eventually woke up, but was not out of the woods yet. He had developed numerous blood clots (which would eventually lead to the amputation of most of his toes). He also had great difficulty speaking due to the tracheotomy opening in his throat.

“Talk about frustration,” Barry says. “I couldn’t really communicate for days – I knew there was an issue but I thought I was articulating better than I was.” This was eventually mitigated by the addition of a speaking valve.

After regaining consciousness, Barry headed to acute care, then briefly to Helen Simpson Rehab Center, before being sent back to Harrisburg Hospital for surgery.

Susie had been unable to see Barry in person during this entire time period. She says that the community was extremely helpful throughout the ordeal.

“There were people who came to the door almost every day,” she says. “Anytime I went out for a walk, I’d see people in the street and have conversations, so I didn’t really feel isolated.”

Though Barry was unaware of it at the time, he too is deeply appreciative that the community helped him and his family.

“I was on davening lists in many synagogues – in Jerusalem, Rochester and Ithaca, NY, Baltimore, Minneapolis, here in Harrisburg,” he says. “People were concerned about me and undoubtedly those prayers went a long way in keeping me going and alive.”

During transit between the rehab center and hospital, Barry and Susie saw each other for about half a minute. However, in the post-surgical unit they were able to see each other on a regular basis.

“It was a blessing to have Susie by my side,” Barry says. “Some days she was there for 12 hours.”

About a week after surgery, Barry returned to Helen Simpson for three weeks of inpatient rehab.

“From the get-go, they were saying ‘you’re going to be walking again,’” Barry remembers. “I couldn’t sit up at first – but as I started getting a little stronger I was able to start walking with a walker.”

As Barry met more and more milestones and eventually returned home for outpatient therapy, his condition continued to improve. “Now, I forget where I put my cane – I’m pretty steady on my feet.”

When Barry came out of ICU – it wasn’t just his recovery that was on his mind, but his work.

“I immediately was talking about ‘I have to get back to work,’” he remembers. “I soon realized how long recovery would take, and once I got home, I had made the decision to not return to JFS.”

Barry had previously planned to retire soon - sometime in 2021 - but still says that leaving early was an “incredible change.”

“JFS was a big part of my life,” he says. “Your self-esteem can take a hit – but mine didn’t take that big a hit because I was just so grateful to be alive.”

Though getting around is a bit tougher these days, Barry – who recently celebrated his 70th birthday - has no plans to sit back in the easy chair. His plans in retirement include: taking up photography, becoming computer literate, exercising at the JCC, returning to minyan at Kesher Israel, getting involved in politics and policy, developing a curriculum surrounding the mental health issues of COVID, and travelling.

“Susie and I picked up lifetime passes to the National Parks,” he says. “Susie would love to take a cruise to Alaska.”

While Barry hopes to keep busy, Susie says that they both are enjoying the relaxation that retirement brings.

“It’s just a lot of simple pleasure and being home together,” she says. “This is the first time in our relationship that we don’t have so many responsibilities weighing on our minds – it’s created a whole new era for us.”