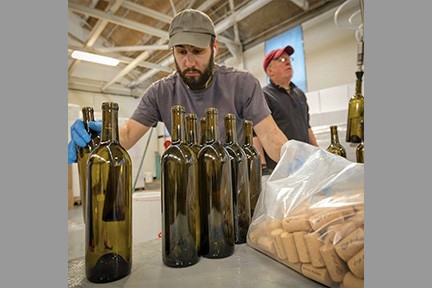 Winemaking is in Kevin Danna’s blood.

As a child, he remembers visiting his great-grandfather, an immigrant from Sicily and former winemaker, who would often greet Kevin with the exclamation “Where’s the wine at?!”

As an adult, he found a knack for tasting wine after he began buying it to make Kiddush on Shabbat. “I found that I had a good palate and came to appreciate the experience I had with it,” he says.

A lighting designer by trade, he began making wine in 2014. “That first batch we made was really bad – but you learn from your mistakes,” he says. “There’s a fine line between good and bad – it only takes a little here and there. That’s the art side of winemaking – practicing, making mistakes, and learning from them.”

By 2019, after completing a two-year HACC program in viticulture certification, interning at Pinnacle Ridge winery (and later becoming assistant wine maker), he was ready to open his own Binah Winery.

Located in urban Allentown as part of the Allentown Economic Development Corp’s Incubation Program, the winery is the first certified Kosher winery in the state of Pennsylvania.

What makes a wine kosher? In addition to using kosher ingredients (the sourcing of yeast, in particular, is one ingredient that Kevin must be careful about), there are laws about who may handle the wine. Kevin’s wines, as non-Mevushal (meaning they are not ‘cooked or boiled’), must be only handled by Sabbath-observant Jews.

“Our wine has come leaps and bounds over the years,” he says, noting that they received two medals at this year’s Virtual Pennsylvania Farm Show.

The winery opened shortly before the COVID-19 pandemic began, but thanks to Kevin’s social media following, he was able to ship cases and cases of his wine to customers all across the country in time for Passover 2020.

“These are high-quality wines and they’re only getting better,” Kevin says, noting that feedback has been overwhelmingly positive. “I think we’re headed in a really good direction.”

Kevin says that he chose the name, which translates from Hebrew to “Understanding,” as a representation of his philosophy of winemaking. “The process of making and consuming wine is a very unique experience – to me it brings a sense of understanding and intuition about the interconnectedness of the world” he says. “When the grapes are growing, they’re absorbing and capturing the conditions of the world that year. We open these bottles, maybe years later, and taste what the world was like at that time.”

While he enjoyed his past career designing lighting, he says that he gets a deep satisfaction from his work as a winemaker.

“The parts I enjoy the most are those last few weeks before we bottle the wine – making finishing touches, blending, and getting to taste it,” he says. “It’s so fulfilling to taste it.”

Binah Winery is located in Allentown, Pennsylvania. Wines are available in stores and online at binahwinery.com and can be shipped to your door.