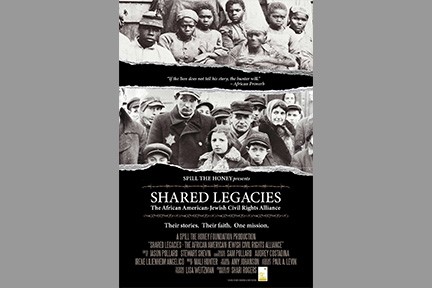 The Edward S. Finkelstein Harrisburg Jewish Film Festival has brought its May 2021 season forward, in the hopes of brightening up the dreary months of winter for our community.

It will be our second, and - vaccine-willing - our last fully virtual outing, which will begin with a special event film in January and, three weeks later, continue on as a five-week, nine-film season, running from February 14th through March 23rd.

Our kick-off special event will be a fascinating and timely documentary, Shared Legacies: the African American-Jewish Civil Rights Alliance.   Chronicling the oppression and racism both American Jews and Blacks endured in 20th Century America, the film settles on the 1960s, when Reverend Martin Luther King, Jr.’s dream was embraced by powerful Jewish spiritual leaders such as Rabbis Abraham Heschel and Joachim Prinz (both of whom had known, and escaped, life under the Nazis), and American Jews were galvanized into action for the cause of the Civil Rights movement.

Generously sponsored by Conrad and Gail Siegel, Shared Legacies will be made available for streaming, free-of-charge (register at our website: www.hbgjff.com), from January 24th-26th.  On Monday, January 25th, at 7pm, we will share, virtually, a panel discussion about the film and the issues it raises, with guests Rabbi Ariana Capptauber; Reverend Earl Harris; and Dartmouth Professor Susannah Heschel, daughter of Rabbi Abraham Heschel.

Our community partner for this event is Black Wall USA (blackwallusa.org).

More information about Shared Legacies and the upcoming 27th Film Festival season will be available in the coming weeks.  Watch this space, your Federation emails, and our website (www.hbgjff.com) for details.

See you (virtually) at the movies!