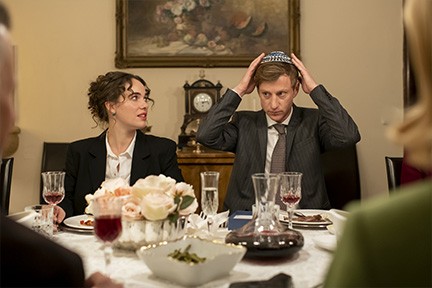 It was quite a challenge this season, to balance the Festival that we wanted to present with the vagaries of Covid-19.  We knew we’d have a virtual component for our patrons who might still be skittish about going to the cinema, but more than anything, we wanted to have all of us back in the theatre, in the dark, sharing the movie-going experience.

In the end, we settled for seven live screenings over the course of a week (two at the JCC a week apart, five at Midtown Cinema over one weekend), all of which will require proof of vaccination to attend, and decided to offer the entire Festival virtually as well.  We’ve even added a bonus week of virtual screenings to make sure you don’t miss a single film.

Our hope with this hybrid model is that all of our guests and loyal supporters will be met at their current comfort levels, and can enjoy everything the Festival has to offer.

Of course, we cannot encourage you enough to come to the live screenings at the JCC and Midtown, for us to enjoy the films together, as we have in so many Festival seasons past.  With that in mind, here’s a sneak preview of what’s in store for you if you join us “in the flesh.”

Opening Night at the JCC, on May 19th, is a bit of a change of pace, with the screening of the first two episodes of a four-part Israeli television series, The New Jew.  Originally conceived to try to explain the American Jewish mindset to Israelis, the series – described by Festival committee member Clare Garfield as “fast-paced, humorous, and sincere” - showcases the many facets of Jewish identity, culture, and practice in our country, and affirms that American Jewry is alive and well in the USA.

The concluding episodes of The New Jew will also be screened at the JCC, on May 26th, as the final in-person event of this year’s Festival.  Both screenings will be followed by delicious dessert receptions, and we are indebted to Lois Lehrman Grass for her sponsorship of both The New Jew events.

Our Midtown Cinema schedule begins on Saturday night, May 21st, with a romantic comedy from Germany, Love and Mazel Tov.  Call it a “Date Night Film,” a “Friend Night Film,” or just a “Let’s Go to the Movies!” film – the picture is fun and fresh and worth a look.  Our thanks to Marjorie Sherman and Doug and Jill Sherman for their sponsorship.

Sunday at Midtown is an all-day affair, beginning with the happy return of our Book Club Film.  This year’s pick is Gentleman’s Agreement, which is celebrating its 75th anniversary, and “while the social prejudice at its heart seems almost benign compared to the violent acts prevalent today,” says Festival committee member Arthur Hoffman, “with antisemitism on the rise, the film offers a fresh look at this persistent problem.”  And, it stars Gregory Peck!

Come early for our traditional pre-screening nosh, enjoy the film, and join us for a post-screening discussion of the picture and the Laura Z. Hobson novel upon which it was based, with Professor Helen Khanzhina.

The second offering of the day on Sunday is actually a double-feature from Israel.  Brought to us through the generosity of the Thom Finn Impact Fund of the Jewish Community Foundation of Central PA, both films explore the complications of self-expression in the religious Jewish community, especially as it pertains to sexuality:

Unheard Voices portrays women whose sexual educations in their religious community ill-prepared them for the connection and intimacy they would desire as adults, and Marry Me However spotlights religious gay men who have chosen to marry and have children at the expense of themselves and the unwittingly complicit women who love them.  “The speakers are compelling and endearing,” writes Arthur, of Marry Me However, “and the film’s insights are also applicable to non-religious people struggling to fit in despite their true identities.”

If you come to both screenings, by now on Sunday you could well be hungry again. Do not fear, and don’t go home for lunch either – the concessions at Midtown are first-rate, and the Zeroday bar in the lobby will be open, with hotdogs and a baked potato bar.

The last two films of the day at Midtown were chosen for live screening in part for the extraordinary Israeli vistas that are highlighted in both films.

The documentary, Lullaby for the Valley, chronicles ten transformative years in the life of artist Elie Shamir, whose huge and much-acclaimed paintings are inspired by the views from his studio in the breathtaking Jezreel Valley. “An incredible and moving portrait,” says committee member Cynthia Graeff, “of an ambitious and steadfast artist, who fights to stay active as his physical condition declines.”  Our thanks to Homeland Center and Homeland at Home for its sponsorship of this memorable film.

Our final Midtown offering is brought to us through the largesse of Handler, Henning and Rosenberg LLC.  An epic, true-life drama, Image of Victory takes place in Israel’s south, in 1948, on a solitary kibbutz that is soon to find itself in the battlesights of an Egyptian tank battalion.  The most expensive film ever made in Israel, it is also among the most unforgettable.

While tickets for the JCC events will be available at the door, and Midtown tickets can be purchased at the Cinema box office, online, pre-purchase of tickets to all of our live screenings is strongly recommended, at hbgjff2022.eventive.org.

See you at the movies!