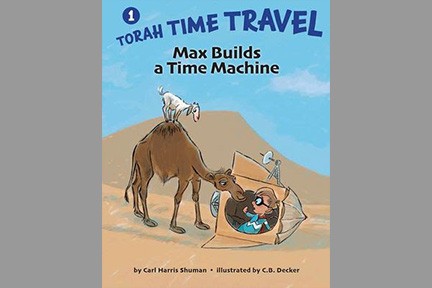 Discussion and debate are central and accepted parts of Jewish learning.

Did the angels that visited Abraham and Sarah have wings? Did the Red Sea really make a path for the Israelites leaving Egypt? You’d need a time machine to know exactly how it played out.

In his new children’s books, Harrisburg community member Carl Shuman imagines what it would be like to go back in time and resolve some of the major questions in Judaism.

The Torah Time Travel series revolves around an imaginative boy named Max (inspired by Carl’s real-life grandson), who travels through history in a cardboard-box time machine to discover what really happened in some of Judaism’s main narratives. Along the way, he absorbs the values at the heart of each story and learns how to apply them to his own life.

“I’m a pretty regular shul-goer,” Carl says, noting that he has drawn material from rabbinic sermons and through studying commentary. “Rather than a religion of creed and articles of faith, ours is a tradition of dispute between rabbis – and out of that dispute comes better understanding of what we’re supposed to do in life.”

Through his books, Carl uses humor to bring the key players of the stories down to earth – like giving the angels Borscht Belt personalities and showing the funny side of Abraham and Sarah.

“While we have an incredibly rich tradition through Tanakh (the Hebrew Bible), it can be hard for modern children to relate to some of those stories,” Carl says. “They learn about the Patriarchs, the Matriarchs, and angels as being perfect figures, rather than the human characters that they are.”

His use of humor appeals to both children and the adults reading to them.

“I’ve always read to my children, and then grandchildren, and I find it can be hard to stay interested,” he says. “I wanted to create a children’s book that speaks not only to the child, but the adult who’s participating.”

The first two books in the series, Max Builds a Time Machine and Max and Emma Cross the Red Sea, are illustrated by C.B. Decker. They will be available to the public in early March, with three other books currently in the works.

Some members of the community will be able to get the first book shipped right to their door through PJ Library.  “Max Builds a Time Machine has been chosen as the PJ Library selection for seven-year-olds for June 2022,” Carl says.

He says that he looks forward to opportunities to share his books with their intended audience.

“I’m excited to visit communities and read my books,” he says, noting that he hopes to launch the book in April right here in Harrisburg. “I love the feedback from kids and I get very energized by it.”

In addition to writing, Carl engages in painting, sculpting, gardening, and acting.

Learn more about the Torah Time Travel series at www.carlshuman.com. The first two books of the series will be available in March 2022 at behrmanhouse.com, with preorders on Amazon coming soon.