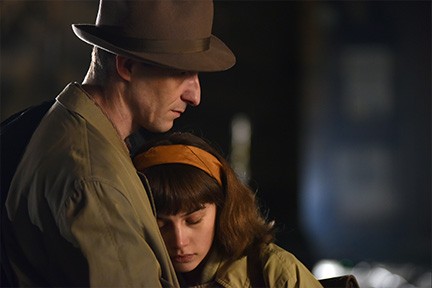 Two fabulous films down, eight more to go throughout the month of July.   It’s not too late to join the fun – go to www.hbgjff.com, register, and you will automatically begin to receive free links to upcoming films as they are premiered as part of our virtual Festival.  You will also receive Zoom invitations for our guest speaker and “virtual water cooler” conversations, which will be held at 7pm at the end of each 24-hour screening day.

This Sunday, July 5th, we’ll be presenting When Hitler Stole Pink Rabbit, a family drama based on the true-life experience of children’s author Judith Kerr.  The film highlights a rarely explored aspect of the European Jewish experience in WWII:  the lives upended, the trauma experienced, and the resilience required to survive, even among those who “got away” before the war began.

On Wednesday, July 8th, we’ll be offering a picture that explores the other end of that spectrum: Those Who Remained, a post-war story about two people who survived the camps but returned alone, and who must cobble together a new life and reframe what it means to be family.  This truly exquisite drama is not to be missed.

Next week, on Sunday, July 12th, the dramatic five-year premiership of Golda Meir is revisited by supporters, opponents, and the woman herself, in Golda. The cameras kept rolling and Golda kept talking after a live, televised interview conducted not long before her death in 1978; this never-before-seen footage shows a complex leader pleading the case for her premiership and her place in history.

We’ve quite a treat in store with our Wednesday, July 15th offering.  First, there’s the movie itself:  Mossad! is an energetic, laugh-out-loud spoof patterned on the ‘80s comedy hits, Airplane and The Naked Gun.  The film features the charismatic Tsahi Halevi, known to our Festival audience as the brooding Shin Bet agent in Bethlehem (and more recently, as an IDF operative in Fauda), who brings his charm to bear on the endearingly bumbling character of Guy Moran, Secret Agent.   Tsahi himself, as well as Mossad!’s director Alon Gur Arye, will be joining us from Israel via Zoom at 7pm on Thursday, July 16th, to talk about the film and to share stories of its filming; it’ll be 2:00 in the morning where they are, so show them some extra love and join our Zoom call!

Just a reminder that each screening day begins at 6pm (you will receive your links about 4pm), and ends 24 hours later.  Our Zoom conversations begin one hour after that, at 7pm at the end of each screening day, and we look forward to seeing you then, and to hearing your thoughts and feelings about the movie we’ve just shared.

Please visit our website, www.hbgjff.com, for more information about these films and the rest of the Festival’s offerings in the weeks to come...See you (virtually) at the movies!