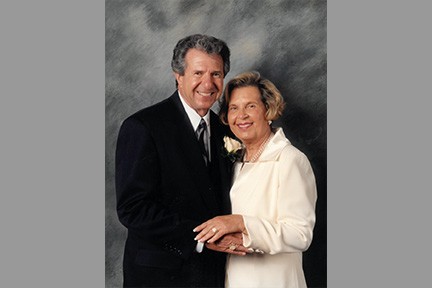 When Dede and Merv Woolf marked seventy years of marriage this summer, they celebrated alongside their fellow Jewish community members, some of whom they’ve known their entire lives.

After all these years, they still never tire of telling stories of being in and around the community.

“We reminisce about times from the old Center and the new Center,” says Dede. “We talk about it a lot.”

Both have been involved at the JCC for as long as they can remember, growing up in Harrisburg’s tight-knit community in the 1930s and 1940s. “When you were a Jewish child in Harrisburg, your life revolved around the JCC,” Dede says of the building that was then housed in Midtown. “Every day, I would walk from the 1900 block to the 1100 block with my group of friends – we would swim and go to the youth lounge. You were either at school or at the Center.”

Merv focused on sports competition, an avid basketball player from childhood on.

“I was a forward, but it didn’t look like a forward today,” he chuckles. “We never knew about the three point line.”

He played alongside all-time great JCC basketball players on teams that could compete with any in the region. The JCC gymnasium at the time offered a home court advantage for those who knew how to use it.

“We had a legal court, but the baskets were against the wall,” Merv laughs. “So we could skid the walls to make shots. Then they put mats up and that made it easier – we would win every game we played!”

It was before one of those games that Dede asked Merv to go to a sorority dance with her. They went, had a good time, and continued to date.

“One night at Howard Johnson’s, where the Front Street Diner is now, I asked her to go steady,” Merv recalls. “She said ‘when are we getting married?’ Real romantic.”

A year later, they were the first couple to get married at Kesher Israel’s then-new building on Third and Schuyllkill. “Seventy years later, it’s worked out,” Dede says.

As they entered adulthood, the community was growing and so did the Woolfs’ involvement. Merv, a competitive athlete who put in time ensuring high-quality programming through the Sports Committee, was a part of the renowned drama department that presented adult performances.

Dede, an interior decorator, was chair of the social committee. She remembers the stacked calendars that entertained the Jewish community at the JCC each month, with headliners like Harry Belafonte and Duke Ellington.

“I can still remember the Dukes of Dixieland playing and marching around, with everybody out of their seat dancing,” she says. They both recall the social center that the JCC became.

“New Year’s Eve was always spent at the JCC – there was no question,” says Merv. “It was our life.”

A JCC Past President, Merv’s brain is hardwired with the names of key members that he can rattle off like a shopping list – department directors, standout athletes, friends, and competitive rivals.

“Merv’s life was coming home from work and going down to the Center,” Dede says, where he would compete in handball and racquetball every other night, until a severe car accident took him off his feet for several years.

That didn’t stop him from remaining competitive. “Eventually, I learned how to play racquetball and tennis left-handed,” he says. He’s most grateful for those who helped him become active again.

Merv’s dedication to JCC athletics was recognized with an award named in his honor, the Merv Woolf Achievement Award, which has been given to outstanding athletes and fitness figures for more than twenty years.

As President, Merv could be strict, requiring a dress code for Directors and instituting other policies. One JCC Director who charmed his way around these codes was Gary Spitz z’l.

“We were fighting every day, yet we were wonderful friends,” Merv says. “He always had a smile on his face.”

For many decades, Merv was the President of the family business, Woolf Steel. As the duo got older, they began to take on the role of builders in the community. Both Merv and Dede were involved in the establishment of the Campus of the Jewish Home, where Dede twice became Guild President, raising $250,000 to build the Guild Garden.

Merv, along with his good friend Herman Gordon z’l, was instrumental in the redesign of the Jewish Community Center in the mid-1990s as Building Committee co-chair. Dede’s keen eye was called upon to update the Center’s furnishings.

As their family grew, the longtime Beth El members decided to join Chisuk Emuna Congregation. “It gave us the opportunity to be with some of our grandchildren on a holiday,” Dede says. “So we went in that direction, but we were only at Chisuk Emuna for a couple years before the fire in 2009.”

Of course, a Woolf was there to step in and help rebuild. This time it was their son, Jerry, who co-chaired the Building Committee, along with Steve Rubin.

“They would call and ask Merv for advice, and then they asked me to do the interior of the building,” Dede remembers. “I thought, are you kidding? You want me to design a synagogue?”

As a co-chair of the Finishes Committee, Dede led the team in selecting carpeting, light fixtures, paint colors, and numerous other details that make Chisuk Emuna the beautiful synagogue that it is today. She considers this project her proudest achievement.

The Woolfs now live on the grounds of the former Blue Ridge Country Club, where they were members for years. “We’re not actively involved because we physically can’t be,” Dede says. “Otherwise, we definitely would be at the JCC.”

They both hope that current and future generations will see their example of giving, not just financially, but, as Merv says, “physically and emotionally” as a footprint to involvement. They feel that they always got more back than they gave.

“There’s no question about that,” Dede says. “When we walked through the doors of the JCC, we felt good. We felt like we belonged there. That was where we needed to be.”