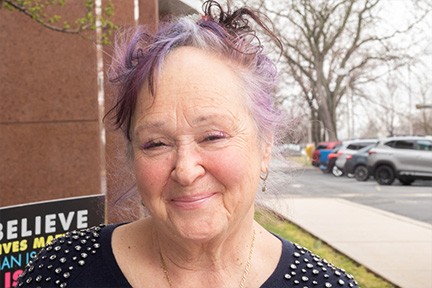 Tanya Benoudiz has lived in America for thirty years. But she was born in Odessa, Ukraine.

“It was a beautiful Jewish scene,” she says. “When they founded the city 200 years ago, they opened the doors from the sea – Jews, Italians, whoever could turn the city into the Garden of Eden was welcomed.”

When Tanya was twelve years old, her family moved to the city of Kharkiv, one site of intense attacks and fighting since the Russian invasion of the country in late February.

“People around the world didn’t know Kharkiv before the invasion – just Kiev and Odessa,” Tanya says. “It was considered the ‘Silicon Valley’ of Ukraine.”

She says she most recently visited the country in 2019, with her husband, Elie. Together, they visited the finest opera houses and explored the sites of her homeland.

“I love Odessa,” she says, remembering one night when she visited a park where she knew she could find people celebrating life. “Only in Odessa can they sing and dance like that.”

They also visited the Brodsky Synagogue where she says the shul “had so many people, there was no room to sit.”

Now, she fears for those Ukrainians she met and millions of others, whose lives have been upended or lost.  As of March 23, more than 3.5 million refugees have flooded out of Ukraine and millions more are displaced inside the country.

Boris Romantschenko, a 96-year-old non-Jewish Holocaust survivor, was killed after his Kharkiv apartment building was shelled by Russian forces. More than 10,000 Jewish refugees have been evacuated from the country by the American Jewish Joint Distribution Committee, with thousands making Aliyah to Israel.

“This invasion is a very sad story,” she says. “I don’t believe that someone can come and conquer another country, telling them how to live.”

While Tanya’s family no longer lives in Kharkiv, her mother, stepfather, and grandparents were all buried in a Jewish cemetery there.

“My biggest concern is my mother’s grave,” she says. “I heard from someone that a cemetery was destroyed so I don’t know if it’s still standing – I have this feeling that she died there again and I cannot help to bury her.” Irina, the grave’s caretaker and Tanya’s friend, has family in the United States, but has been unable to secure a visa to travel here.

While she’s lived as an American for thirty years, she still sees herself in the millions of Ukrainians living in crisis.

“I love America more than anything else – I feel that we are free,” she says. “But I also have solidarity with the country that I came from. My children were born there, I had a family born there – it’s the foundation of my soul.”

Want to get up-to-date information and help Jews living in Ukraine? Visit www.jewishfederations.org/crisis-in-ukraine2022.