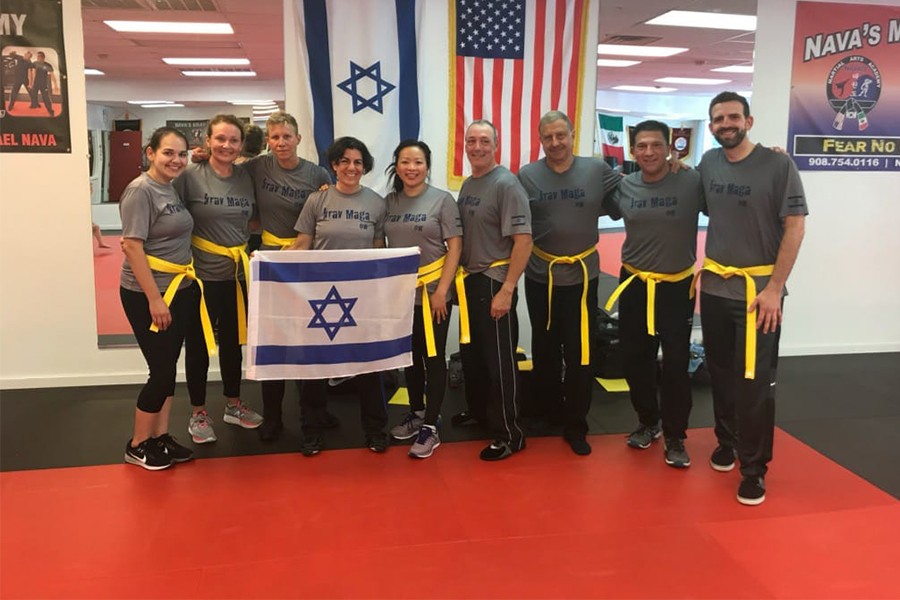 As a Sergeant in the crime unit of the PA State Police, Tandy Carey knows that she has to be prepared for anything at all times. “I’ve been with the State Police for fifteen years,” she says. “The individuals we normally deal with tend to be a little different than when we started. We have a lot of tools that we can use, but that doesn’t always work, so you need something to fall back on.”

Since early this year, Tandy has worked to add a new tool to her skillset: Krav Maga. Tandy participated in Joelle Gozlan’s biweekly Krav Maga course at the Harrisburg JCC, where she and other beginners learned the basics of the Israeli self-defense system.

“It’s basically teaching you how to defend yourself and knowing the proper techniques to do so, rather than relying on the tools on your belt,” Tandy says.

In addition to the 3-hour sessions that were held every other Sunday, Tandy spent about 4 hours each week practicing on her own. “If you don’t practice and focus on your own, you are going to forget a lot,” she says. “Anybody can walk up to you and put you in a chokehold, but Krava maga teaches you how to get out of those situations.”

While she hasn’t had to use her new skills on the job or as a civilian yet, her training has paid off in a different way: Tandy tested for and earned her Yellow Belt this summer, the only participant in the Harrisburg group to do so. “It was an intense 2.5 hour test with people who really knew what they were doing,” she says. “It’s really rewarding to think about how much progress I’ve made and to know that if your put your mind to something, you can do it.”

In addition to the physical aspect, Tandy says she loves the intensity of the sport and the knowledge and confidence that it fosters. “It’s really a great skillset for anybody to have,” she says. “You don’t have to be in top shape or be extremely experienced to use Krav. It definitely boosts confidence level and strength within yourself that you may have never before sought out.”

Tandy, who has participated in Spartan Races and full and half marathons, hopes to test for her Orange Belt soon. “This is something that I don’t want to stop pursuing. For me, if you are dedicated and hold yourself accountable, you get further in life.”