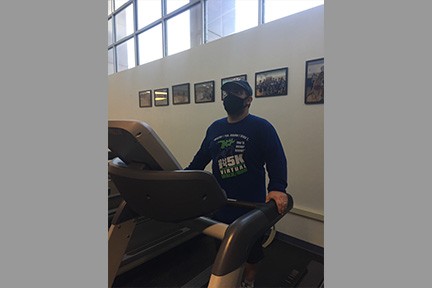 The Harrisburg JCC Annual 5K is a tradition and much loved event of many in our community.

2020 is a year that has brought about great change and adaptation and the 5K race was no different.  After determining that an in-person event was not likely to occur, the JCC race committee turned the annual event into a virtual experience.  Runners and walkers were able to choose when and where to complete their event during the weekend of September 11-13th.  This change in circumstances allowed runners from 7 states including California, Georgia, New Hampshire, North Carolina, New York, New Jersey, and Pennsylvania to participate. Unlike a traditional 5K, winners were not determined by best finish time but it should be pointed out that the top reported 5K time went to Chris Hanley in a time of 23:23.

The race benefited both the JCC Sports and Fitness Department and the Josh Klein Bikkur Cholim Fund and saw over 120 runners and walkers from all backgrounds and fitness levels register to participate.  From experienced and more serious runners to those using it as motivation to continue on their fitness journey, the race offered something for everybody.

Throughout the weekend and afterwards, we heard from many amazing runners and walkers who joined us for this new spin on the community tradition.

Nicole Cassle is an avid runner who finished her 5K with the top reported time for a female of 23:24.  According to Nicky, "I fell in love with running in high school, ran cross country at Albright College, and continued to participate in races on a regular basis, with the half marathon being my very favorite distance! I was signed up for many races this year, ranging from a 25K trail race, to the 8K and half marathon in VA Beach, to a 15K at the Biltmore - none of which were able to take place, due to the pandemic.”

“I didn't sign up for any virtual races, since I decided to put a focus on running for my mental health and enjoyment, instead of constantly striving for a new personal record. But when I saw the email about the JCC Virtual 5K, I knew it was an event I needed to do - to support an organization which promotes peace, love, and equality. Thank you to all who helped to organize such a great event and for providing me with an opportunity to feel ‘normal’ in such uncertain times."

41-year-old Eric Gregerson was diagnosed with cerebral palsy at birth. Growing up, he

was active playing basketball and going to the gym with friends, but never participated in

organized sports. As Eric got older he started having hip problems and as a result became less active. This past June, Eric started physical therapy at Select PT in Harrisburg because of extreme weakness in his knees and legs.

According to Eric, “I couldn’t walk without a hiking cane and I didn’t have much stamina.”   As a result of the PT, Eric got stronger. “I never really envisioned myself doing a 5K. When the JCC advertised the Virtual, I thought that I could give it a try. The 5K provided motivation and a goal to work towards. I know my time would be slow on a road course, but figured I could do okay on a treadmill, so I signed up. My wife, Christina has been very supportive and encouraging of me. Without her support and the guidance of my physical therapists, Nick and Cam, I wouldn’t be on the path I’m on now. The 5K isn’t an ending for me, but rather the first of many goals achieved!”

Tim Creegan, who lives in New Hampshire, and his friend Gregg Fink, have been participating in the JCC 5K since 2005 and Tim has only missed the race twice during that time. “Gary Klein and I met at Brandeis in 1996.  I’ve been through the ups and downs with him.  I’ve personally experienced the indomitable spirit that is the Klein family.  There is no quit in K-L-E-I-N. There are people in life to which others are drawn. Gary is one of those people. He’s a builder of communities, a consensus builder, an unapologetic liver-of-life, and a generous Mensch.   That is why I gladly make the trek each year to recognize Josh’s life and support Gary, his extended family and the Harrisburg Jewish community.”

The Henig family has spent the past few months separated due to the pandemic but were excited to come together for a family vacation at Ventnor City, New Jersey. The week just happened to correspond to the Virtual 5k.  According to Jill Henig “First time together in forever. Planned family week and thrilled to be able to run the 5K together! We LOVE our JCC and the Kleins. We support this run every year. If there was a prize for most Josh Klein shirts, we would definitely win!”

Thank you to all participants, staff, and volunteers who helped us adapt to circumstances this year and make this event successful. Look inside for a list of sponsors and for winners of categories like Most Spirited Picture, Best Location, and more!