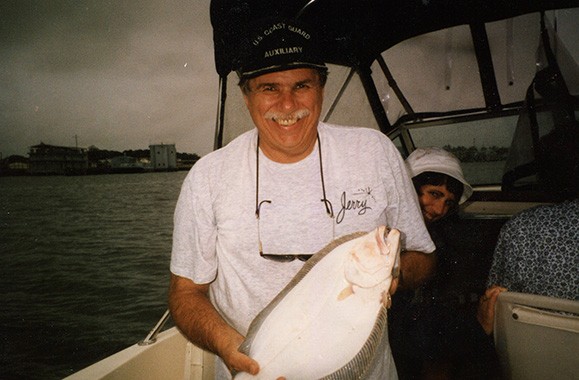 For nearly his entire life, Jerry Rogoff has been somewhat of a “fish out of water.” A 1987 profile of Jerry, then Vice President of the JCC, mentions that his friends referred to him as the “Best Jewish Fisherman.”

Jerry and his wife, Rena, first came to Harrisburg in 1962, where they raised their family. Over the next 30 years, he was active in the retail business, and JCC leadership. For 10 years, he volunteered as a physical education instructor for senior adults. But it wasn’t until he retired and moved to Virginia Beach that he discovered a way to merge his passion for volunteering and his love of boating into one through the Coast Guard Auxiliary.

“It’s a very unique organization,” says Jerry. “Nowhere do civilians operate on a military base in uniform except through the Coast Guard Auxiliary.”

Jerry first got involved in the organization when he bought a much large boat than he was used to owning. “I didn’t know much about it, so I took a free course from the Coast Guard Auxiliary,” he says. “I fell in love with these older guys that were teaching it. At the end, they asked certain people to join, and I became one of them.”

The United States Coast Guard has approximately 41,000 active duty members, while the auxiliary boasts 31,000 additional members, mostly retirees in their 60s, 70s, and even 80s that help to support Coast Guard missions. The members routinely patrol the coast, help boaters in need, and teach free courses to the public.

“The secret word to everything in the Auxiliary is ‘qualifying,’” says Jerry.  “The standards are very high for the knowledge that you have to have and the condition of your boat and gear.”

As a member of the Auxiliary, Jerry would work alongside enlisted members of the Coast Guard to perform the duties of the branch.  Many of the members were 18 – 20 years old and away from home for the first time. “It was like being a father figure,” Jerry says. “They would ask for advice on whether to buy a car or not. When you go on patrol, you’re not supposed to wear jewelry, so the women would trust us to hold their engagement rings until they came back. They would use you as a substitute father.”

In his younger years, Jerry had served in the U.S. Army at the tail end of WWII, when he was stationed in Alaska (before it became the 49th state).

While he left the Army after a couple of years, Jerry spent more than two decades with the Coast Guard Auxiliary before retiring a few years ago in his late 80s. “It was the best twenty –five years of my life,” he says. “Every time you come across a boat in trouble and you end up helping someone, they’re so grateful.”

When he finally left the Auxiliary, he was given the very rare honor, as a civilian, of receiving a flag that flew above Capitol Hill, a recognition typically reserved for active duty members. “They didn’t pay us in the Auxiliary,” he says. “The ribbons and plaques – that’s the pay.”

Now, Jerry and Rena have moved back to Harrisburg to be closer to their son, Marty. During her career, Rena taught English and Journalism and was beloved by her students at William Penn, where she taught for 6 years, and Camp Hill, where she spent 24 years. In her retirement, she became a docent at the Chrysler Museum of Art in Norfolk, VA.

Both Jerry and Rena have given much of their time and energy to helping their communities through volunteer work and stewardship. But Jerry sees the Coast Guard Auxiliary as an example of how he has benefitted through his service.

“It’s a two way street,” he says. “You get something for giving something.”