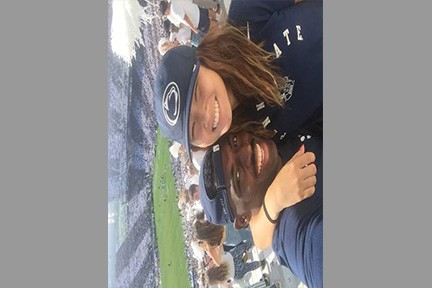 Whether he’s working out at the Jewish Community Center’s Fitness Center or fulfilling his Air Force duties, the Susquehanna Township High School graduate says he always takes opportunities for growth.

“Do more than meet the status quo of life,” he said. “Leave your mark on the world and your community. Be devoted, dedicated, and ready for a little blood, sweat, and tears. The road to success isn't easy. Therefore you must hunker down and power through the pains, roadblocks, and downfalls of life.”

Quenton has been “hunkering down and powering through” since his Harrisburg-area boyhood.

After graduating from Susquehanna Township High School in 2012, Quenton enrolled in Harrisburg Area Community College, then East Stroudsburg University for a semester. Before he could graduate from these schools, he got the opportunity to work full-time for the military. He never looked back.

Quenton said that dealing with adversity and diversity in high school challenged him intellectually and socially, preparing him for life in the real world and Air Force.

The next part of his educational journey took him to the Penn State World Campus, the Community College of the Air Force, and the American Military University. He earned an associate’s degree, then both a bachelor’s and a master’s degree in cyber security.

as a First Lieutenant in the Pennsylvania Air National Guard. He is the director of operations for the 193rd Air Communications Squadron in State College.

“I'm devoted to serving my country and the Air Force,” he said. “I plan to finish out and do twenty years or more of service.”

Quenton has lived in various parts of the country and world, growing up in Harrisburg, training in Biloxi, Mississippi, and Washington, D.C., working in D.C. and St Louis, where he served on an active duty tour and worked for the National Geospatial Agency as a computer engineer. He now works in State College.

Along the way, he was deployed to Iraq and Kuwait. In Kuwait, he worked in cyber defense.

These days, as Director of Operations, he leads the day-to-day workings and operations of the 193rd.

“I manage the squadron's personnel and maintain our computerized system, which is used by our operations unit to carry out their duties,” he said. “Our mission is to provide command and control of air operations for larger geographic and functional components of the Department of Defense.”

Life isn’t all work for Quenton. He recently married Christie Hoo Yee, originally from Hong Kong. His wife, an audiologist who works in New Hampshire, speaks Mandarin, Cantonese, and English.

Quenton, who has worked as assistant wrestling coach for Bald Eagle High School in Bellefonte, loves to be active. When he’s not doing his military duties, he works out at the JCC gym, plays basketball or ultimate Frisbee with his four brothers, and rides either his dirt bike or mountain bike.

He also mentors others.

“Once you gain success, spread the word and mentor others so they can then navigate the journey of life for themselves,” he said. “Having a mentor is like having the cheat codes to life. Why make the journey difficult for yourself if one can tell you the path?”

Quenton credits his own mentors with much. Whenever he has the chance, he speaks at schools and to young adults. “Spreading a wealth of knowledge through mentoring is of the utmost importance for young men and women around the world,” he said.

Quenton said he is enjoying his “short period” in the midstate. Next, he said, he plans to move out west for a new Air Force job – and a new adventure.