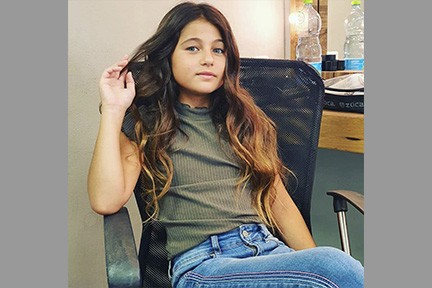 Gili Nimni is just eleven years old, but already she has achieved success as one of the premier child actresses in Israel.

“I always wanted to be an actress,” she says.

Gili, a Silver Academy student who is living in the area with her family as part of an exchange program with the Army War College in Carlisle, began acting professionally just a few years ago.

Since then, she’s appeared in commercials, feature-length films, and hit tv shows.

Her career began taking off after she was a host of the show Art Party, a Nickelodeon Israel series that featured Gili, along with an assortment of other hosts, leading viewers in completing arts and crafts projects each episode.

As an animal lover who has a dog, Kim, and a parakeet, Kyle (both named after “cool American names”), Gili was excited for her next big project, Walla Koala, which was filmed in a zoo.

“We save and take care of animals on the show,” she says. “The filming was very fun, with animals like lemurs and giraffes – and we solved problems with the animals, go inside the cage, and even give the animals ice cream!”

Gili has high hopes to become a serious actress, with a great respect for stage and dramatic acting.

“Two years ago we saw The Lion King on Broadway,” says Liroz, Gili’s mother. “Gili barely understood English at the time, but she said to me, ‘You see those kids? One day I want to be on that stage, too.’”

When the COVID pandemic hit, Israel was one of the first countries to feel the impact. Nickelodeon Israel hosted a special TV event featuring then-Prime Minister Benjamin Netanyahu, who Gili interviewed and asked questions sent to her by other young Israelis.

“Kids sent us questions through Instagram – things they wanted to know,” she says. “Questions like ‘When can we see our grandma and grandpa? When will we able to travel the world?’”

Now spending the year with her family in Central PA, she finds that while she misses her home (especially the food), she is excited by super-sized America.

“Everything is bigger here,” she says. “You can’t find something like Hersheypark in Israel.” Taking advantage of her time here – she’s been to Hersheypark three times and hopes to visit every attraction in the park – she still finds time to enjoy her hometown hobby of horseback riding.

She does miss the beach, which is just ten minutes away from her home in Bnei Zion (a moshav near Tel Aviv). This winter, she plans to return to Israel to film season 2 of the mega-hit TV show PPS. The show stars Gili alongside Israeli pop sensation Jonathan Mergui, who plays a robot that becomes Gili’s “Personal Pop Star.”

Gili was nominated for an “Israeli Emmy” for her performance in the first season.

While she’s not doing any acting stateside yet, she is making the most of her time here alongside her sister Talia and her brother Michael.

“It’s very different here, and I am enjoying it,” she says.