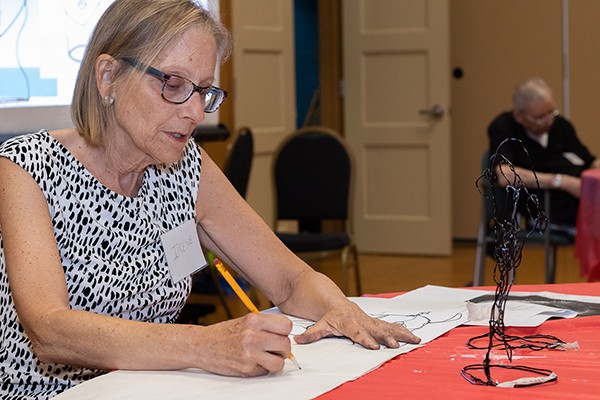 Sarah Weisberg excelled in art as a high school student in Brooklyn.

Decades later, she still does as part of the JCC Senior Adult Club’s Artist-in-Residency Program.

“After I got out of high school, I discontinued art, although I later went into photography,” Sarah said as she twisted and formed floral wire into a portrait. “When I started coming to this Artist-in-Residency class a couple years ago, I rediscovered the artist in me.”

That’s exactly what Cheryl Kugler, an independent artist who teaches art as part of creative aging, had in mind when she began the program at the Jewish Community Center. Now in its third year, the 15-week program has been good for her students, she said.

“Art keeps the mind active and growing,” she said. “I want people to work out of their comfort zones. This class is not competitive. Nobody is being graded. I just want them to try new things.”

The program is facilitated through a grant from the Arts For All Partnership, a partnership between the Cultural Enrichment Fund and the Greater Harrisburg Foundation, a regional foundation of The Foundation for Enhancing Communities, and Jump Street.

“I had the participants bring in a picture of someone who was meaningful to them and had a sense of humor,” Cheryl said. “We sketched portraits of these people to learn how to work from a single line. Then, I had them make a wire portrait of that person.  Art keeps creativity growing.”

A visitor to the program noted the easygoing nature of the class. Seniors who may have worked their hands hard for decades were relaxed as they twisted wire into shapes. Their eyes, which may have seen unending work, now sparkle as they have fun indulging their imaginations.

Sarah Weisberg made a loving wire portrait of Lucas, her grandson, complete with blue beads for his eyes.

Irene Berman-Levine and her mother, Phyllis Berman, have come to the classes together, where the mother made a wire portrait of her husband, Leonard, and the daughter did a portrait of her son’s dog, Macy.

Irene said that she “couldn’t wait to turn 65 and do some of these activities for seniors.” She noted that her mother and sister are artists with natural talent.

“I’ve never had art training before,” she said. “I’m an artist wannabe. I love learning about the different art forms and dabbling in new techniques. This is two hours of pure fun. Cheryl has told us that our art doesn’t have to be perfect.”

Harold Williams Jr. was just starting on a wire portrait of his late great uncle, Marshall Sanders. Using a charcoal drawing of him for a model, he said he started with the head and hair.

“I took art in high school and always liked it,” he said. “This is a first for me.”

At a nearby table, Laverne Cooper made a wire portrait of “I love you” in sign language and Roberta Krieger made what she called “a nobody with a nose ring.”

Carol Huling said that she likes working with wire “because it bends easily.” She made a wire portrait of her husband, Michael.

“I’ve never done art before, but it’s fun,” she said, looking up from her handful of wire. “I like being with people and find that this class stirs my creativity. I try not to judge myself and just go with the flow.”

The seniors also are working on “River of Life” exercises in which they answer a question: “If your life were a river, what shape would it take?” Participants draw bends and turns for changes, rocks or boulders for life-altering moments and, sometimes, a river flowing powerfully and peacefully when all is going well.

The class ends at 2pm on Sept. 25th. That same day, the class will present an exhibit of their work in the Spector Lounge at the Harrisburg JCC.