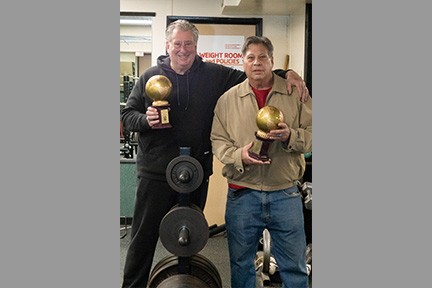 In February 2022, Brent Stine and Corey Stein were both preparing to compete in the International Powerlifting Association’s PA State Championships in York, PA.

The two Jewish community members were confident in their abilities, but they had to return to their roots first.

“Brent invited me to Kesher Israel – where we both grew up attending services – and we were given a special blessing that we would be healthy and safe from injuries,” says Corey, who began his powerlifting career at the Harrisburg JCC.

The blessing didn’t hurt – both Corey and Brent, who goes by “Goose” in the weight room, took 1st Place for Bench Press in their respective categories.

Goose, who competed in the 70 – 75 age group, successfully bench pressed 235 lbs, less than a year after tearing and having surgery on his bicep. He bounced back quickly, not wanting age or injury to stand in his way.

“I’m driven by the idea that at 73 years of age, I’m not going to let Father Time interfere with me – I want to keep lifting as long as I can and keep striving to get stronger and maintain my health,” he says. “As I made my last push at 235, the announcer said ‘Congratulations Brent Stine, 73 years young!’, so that made me feel good.”

Corey maxed out at 250 lbs in the 65 – 69 age category – not bad for his first competition in over thirty years.

The two lifters – who are not related – had crossed paths around the community but never knew each very well until recently. They came together as part of a group of Masters-aged lifters at the East Shore YMCA who train under former world record holder, Gerald “Jake” Burke.

“We’ve gotten to share this interesting experience,” Corey says. “We share a lot of history and this has been an interesting coming-together – I don’t think Brent and I would have gotten to know each other if we didn’t have this to share between us.”

Neither show any signs of slowing down – as they prepared for competition, they were both working out six out of seven days each week. “Our coach wanted me to cut back,” Goose says. “But I have the mindset that I have to do something every day.”

They both plan to compete in the National Championships in November and have their eyes set on state and national records.

“We go in trying to do the best we can do,” Corey says. “More so than walking away with a trophy, it’s really about inspiring people around us.”