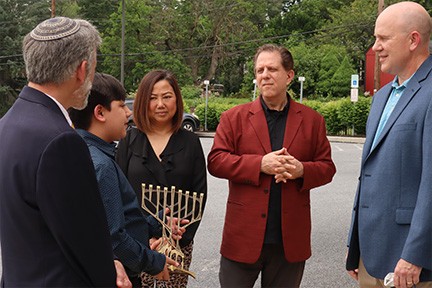 An old menorah found in a Virginia attic and nearly thrown away has a new home with a recently Bar Mitzvah.

C.J. Schneier, who became a Bar Mitzvah at Chisuk Emuna in May, received the gift from Matt McGuire, a Catholic man new to the area.

McGuire, who in November moved with his family to Carlisle from the Richmond, Virginia area, spent the past seventeen years teaching at the Maggie L. Walker Governor's School in Richmond. He continued to teach there virtually even after moving to Carlisle. In August, he will begin teaching history and government at Trinity High School in Camp Hill.

Before he moved, a colleague of McGuire’s bought a new home and found the menorah while cleaning his attic. The man considered throwing it away before remembering hearing of McGuire’s interest in different religions.

When the man asked McGuire if he wanted the menorah, McGuire accepted it. He first tried to find a home for the menorah by offering it to some Jewish colleagues and a few families, but none of them needed a menorah.

“So, I brought it to Pennsylvania,” McGuire said. “My belief is that what is sacred to a group of good people merits the respect of all people. I decided it was important to get the menorah in the hands of a Jewish family or congregation.”

He searched online for Harrisburg synagogues, and found Chisuk Emuna, which impressed him as “a fairly large and well-organized congregation. I e-mailed Rabbi Ron Muroff and told him that I'd like to get the menorah in proper hands.  He e-mailed me back with the idea of giving it to C.J .as a Bar Mitzvah gift.  I loved the idea.”

The rabbi suggested that McGuire write C.J. a note explaining the background of the menorah. So McGuire, a devout Catholic who belongs to St. Patrick's Catholic Church in Carlisle, bought his first Bar Mitzvah card and typed a letter to C.J., first congratulating him on reaching a landmark in his spiritual development.

McGuire advised C.J. to always be brave in professing his faith.  He noted that C.J. would be celebrating his faith and protecting the rights of Americans whether he was wearing a Star of David or displaying the menorah.

“If one American cannot practice their faith without fear, then no American’s religious freedom is fully secure,” McGuire wrote in his letter. “If you show courage in expressing your faith, you will be giving life to our shared rights and you will be showing the true spirit of America. Peace be with you and your family.”

McGuire said that he has been appalled to see attacks on American Jews become more common and disturbed to learn that some American Jews actually think that they may have to consider becoming more cautious in visibly professing their faith.

“If it isn't safe for a Jewish American to publicly celebrate their faith in the United States, where is it safe to do so?” he asked. “I believe an effort to intimidate any American from practicing their faith is an attack on everyone's religious freedom.”

C.J. was both “delighted and a bit shocked” to receive the menorah at a gathering attended by himself, his parents, McGuire, the rabbi and a few others, McGuire said. The soft-spoken young man, who has lived in both the United States and Thailand, expressed appreciation, noting that having a Bar Mitzvah means taking on more responsibilities.

“This year we couldn’t do a (Bar Mitzvah) project,” C.J. said. “But when I go back to Thailand, hopefully I can teach kids English.” He said that his menorah, which was made in Israel, “looks pretty old” and that he plans to keep it “forever to remember my Bar Mitzvah and all the hard work and practice I did to complete it.”

The Schneier family then gave McGuire some handmade masks featuring Torah scrolls. McGuire said he was honored to play even a small part in the Bar Mitzvah.

Rabbi Muroff thanked McGuire for his generosity and insight in saving the menorah and bringing it to someone who values it.

“At a time of so much hatred and acts of violence, Matt's act of respect and kindness is so hopeful and uplifting,” he said. “The menorah is such a fitting gift for CJ, who in his own unique ways is like a light in the world. With the support of his family, friends, and congregation, C.J. is prepared to take on the challenges and responsibilities of being an adult member of the Jewish community and make a difference in the world.”