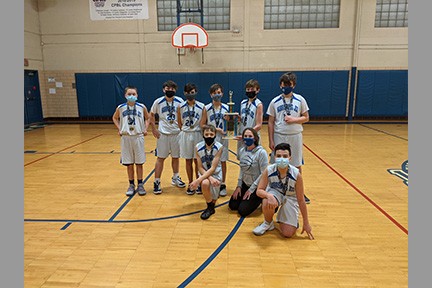 It was a season like no other.  In a normal year, practice begins in October, but this year the middle school teams didn’t hit the court until December.

Practices got shut down for three weeks and moved to being virtual on Zoom.  The amount of games was reduced and all players had to wear masks.  However, no matter what obstacles were thrown in the way, the JCC Girls and JCC Boys basketball teams were able to deliver on the court and both teams brought home the championship in the CPBL tournament sponsored by Capozzi and Adler, P.C.

The Middle School Girls team had big shoes to fill.  Last year’s squad won the championship and dominated on the court.  But a new season found many former players having graduated from middle school and numerous younger players stepping up and making an immediate impact on the court.  The girls went undefeated in regular season and were the number 1 seed in the CPBL tournament.  According to 7th grader Devorah Cheskis, “The season sure was one to remember, but I am extremely happy to have had it.  I am eternally thankful for this team.  I made amazing friends.”

The girls played Grace Baptist of Carlisle on championship night and dominated on the court.  The girls won 25-6 and were led by CPBL All-Stars Christina Kelemen and Devorah Cheskis.  Ariella Jackson stepped up as the starting point guard and key minutes were given by Yael Hodara and Zariah Bernot.  First time middle school players Maddy Lepore, Josie Sarff, Rena Cheskis and Aliyah Petty all contributed to bring home the win and earn a back-to-back title for the girls, building on the success of the 2019-2020 season.  Ariella Jackson commented, “This season was great because we have amazing team members.  We may be a little goofy, but we work together as a great team! We didn’t just become a team but one big family!”

The Middle School Boys started out with some growing pains, losing their first four games of the season.  Yet the group was determined to improve and never gave up hope.   With practice the boys showed signs of growth and improvement.  The boys entered the CPBL tournament as the three seed.  In the semi-final, the JCC knocked off the 2 seed Carlisle Christian.  Championship Night saw the JCC take on defending champion Grace Baptist.  Earlier in the season, the boys lost to Grace Baptist by fifteen points.  The boys however believed they were ready for their rematch and after a few key adjustments they came out ready to attack.  According to Aaron Pellegrini, “We just needed a little time.  Once we got comfortable our performance started to get a lot better.”

Memories were made and banners will hang above the court as the teams will never forget winning a championship during “the year of the mask.”

Six High School Boys hit the hardwood this winter to represent the Harrisburg JCC during the high school basketball season.  Despite playing a shortened schedule, this group proudly wore their JCC uniforms and when it was all said and done, the team had won every game but one and was proud of their accomplishments.  The team was coached by Brendan Booz and was led by Senior and career JCC Player Sammy Schwab.  In addition to Schwab, the team featured Sid Astrachan, Ben Berger, Leo Freedman, Ian Miller, and Danny James.

Senior Sammy Schwab started his basketball career at the age of five in JCC with Iddy Biddy and noted, “I was happy to be out on the court with my teammates and get to finish my last season with the JCC as I have been playing for the J for thirteen years.”  Schwab continued, “We were really happy with our results as only one loss in an entire season is something to be proud of.”