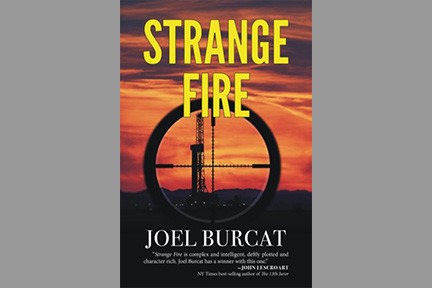 Harrisburg author Joel Burcat returns to the shelves on February 2 with the third novel in his “Mike Jacobs” series, entitled Strange Fire.

A follow-up to his previous books, Drink To Every Beast and Amid Rage, the novel tells the story of Mike Jacobs, a Jewish, 29-year-old environmental lawyer with Pennsylvania’s Department of Environmental Protection. This time around, Mike finds himself in the middle of a dangerous dispute between Bradford County, PA residents, drilling companies, and his employer.

“Mike is back and he’s involved in a question of whether or not fracking caused contamination of a water supply,” Joel says. “He meets a girl, of course, and he’s deeply involved in trying to do the right thing, as always.”

Joel, a retired environmental and energy lawyer, says that he wrote the story in a way that both entertains and educates.

“When someone reads this book, not only will they have read a thrilling story, but at the end, they’ll have learned something about fracking from an evenhanded perspective,” he says. “I want people to recognize that this is a realistic scenario.”

The book has already received praise from NYTimes Besteselling authors John Lescroart, William Landay, and Lisa Gardner, and its opening chapter was recognized with the 2nd place honor in the Pennwriters 2020 Annual Novel Beginning Writing Contest. Joel says that he grew as a writer while creating this book.

“I’m able to handle the characters better and made them deeper and more interesting,” he says. “I tried to keep the pace up – I didn’t want anyone skipping over any of the story, but wanted them to focus in on the whole story.”

Joel will appear on Good Day PA on WHTM27 at 10am on February 2nd, followed by a Virtual Launch Party with Midtown Scholar and interviewer Harvey Freedenberg on February 8th at 7pm, an online program with publisher Headline Books on February 15th, and a planned in-person signing at Cupboard Maker Books on Sunday, March 13.