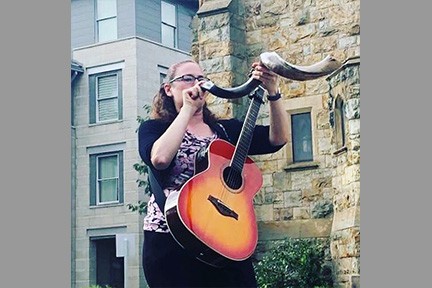 Molly May’s fascination with the shofar began when she was a little girl and heard it at a Rosh Hashanah service at Beth El Temple.

She thought it sounded “pretty cool,” especially when some of the men in the congregation were competitive about blowing the longest tekiah gedolah, the long blast sounded at the end of a shofar-blowing sequence.

She remembers practicing on a small tan shofar at the home of her grandparents, Annapearl and Arthur Frankston, who lived along Italian Lake. Eventually, she became a self-taught shofar blower and has been doing it on a regular basis since graduating from college. Her aunt, Marian Frankston of Harrisburg, wasn’t surprised.

“Molly always had musical talent,” she said. “I remember her playing a toy piano when she was two. She could pick out tunes easily. She’s always had perfect pitch. She can play at least a dozen instruments. Her husband and children are musical too.”

These days May, of Pittsburgh, serves as cantorial soloist and choir director at Rodef Shalom Congregation, a large reform synagogue. She grew up attending Beth Shalom Congregation, a large conservative shul in Pittsburgh. The two congregations collaborate for religious school. May blows shofar in both shuls, at the joint religious school, and has blown it at nursing homes for Jewish residents.

An accomplished musician – she has bachelor’s and master’s degrees in music education – she took to blowing a shofar rather easily.

May bought a shofar at a Judaica store and used it for years until her mother, Linda Frankston Doernberg, bought her an antelope horn shofar in Israel about five years ago. She’s used it ever since.

Her Aunt Marian called May’s shofar blowing “inspirational. She takes her creative gifts and uses them in religious observances.”

May is especially talented at tekiah gedolah, the long blast sounded at the end of a shofar-blowing sequence on Rosh Hashanah and at Neilah, the last of the five Yom Kippur services.

In Orthodox congregations, women do not blow shofar on behalf of men. May blows the shofar from the bima in Conservative and Reform shuls.

In 2013, May became the first woman to blow the shofar at Beth Shalom, which to her was not a big deal. “It was more a matter of not having had any women who offered to do it,” she said. “They had an interim rabbi who was a woman, too.”

May is studying to be ordained as a cantor through the Academy for Jewish Religion in Yonkers, N.J. She and her husband, Charles, are the parents of three sons.