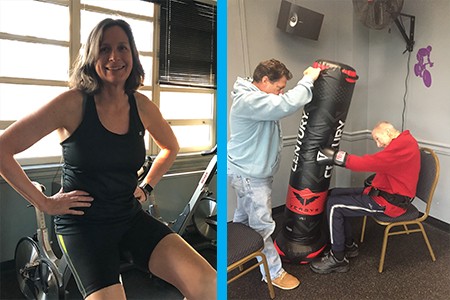 Everybody can use added inspiration in life.  One only needs to look around the Harrisburg JCC to find people who help to provide inspiration and motivation to keep them going beyond perceived limitations.  The inspirational athlete award named after Ben Cherry (z’l) was started to honor those dedicated to fitness at the JCC that make those around them better.  The award was created by Herm Minkoff (z’l) as a way to remember and honor his friend.  While both men may no longer be with us the memory of both continues to serve as inspiration to many.  This year, two very deserving people are being bestowed with the honor of being the 2020 Inspirational Athlete Award.

Amy and her family have been fixtures in the JCC.  Her two sons, Wes and Aaron, are present almost as much as Amy, and her husband, Kevin, was responsible for getting her here in the first place.  Amy is in the building almost daily.  If she is not swimming or spinning she may be in Body Pump, group interval training, or working out on her own.  She is multidimensional and will also be found attending the educational and cultural events that make our community center so special.  In between workouts, Amy provided us with this information:

I became a member of the JCC 11 years ago after my oldest son, Wesley, started playing basketball for Terri Travers’ Middle School team. My husband, Kevin, was a corporate member who played basketball Thursdays at lunchtime and knew about the program.

I was a member of the downtown YMCA at the time, but I soon decided to join the J instead since it was closer and there was a pool. At first, I mostly came to swim laps, but as the boys got older and my time opened up more, I added classes – spin, Body Pump, and suspension/group interval. I like the variety that the J has to offer and the opportunity for me to cross-train.

Today, I make exercise a priority, and I keep coming back because I like how I feel – healthy and alive – both during and after a work-out. I had some problems with back disc pain in my late 30s/early 40s, and I have found that regular exercise helps to keep my core strong and alleviate back pain.

Another reason I keep coming back to the J is the people I’ve met here. The J is intimate enough that I get to see many of the same faces, and over the years I have made many friends here. It’s fun working out with a group of people who inspire and challenge you to do your best.

The JCC has been a big part of our family’s lives. Both boys went through the middle and high school basketball program and worked the fitness desk while in school. Aaron is away at college right now, but Wesley is a regular at the J. In the summer, he has lifeguarded at Green Hills, and in the winter, he coaches the HS boys’ JV basketball team. He has also run in the JCC 5K and joined me several times for the Indoor Triathlon.

Over the years, the JCC has become my second home, and I look forward to going every day and seeing everyone there. I love the J and the many opportunities it has given me and my family to grow and become stronger, better people.

Mel Krieger was born and raised in Philadelphia where he loved to play baseball and football with all of his friends.  Life eventually took Mel to New York where he met his wife, Roberta.  Mel and Roberta owned a card and gift shop for 28 years.  Mel is the father of two and grandfather of four.  His son, Michael, and his family live in New York.  His daughter, Barbara, and her family live in Harrisburg.  It was in 2002 that Mel and Roberta decided they were ready to get away from big city life and move to Harrisburg.

Within a few months of moving, Mel was diagnosed with Parkinson’s disease.  It was at that time the doctor told him that while the disease has no cure the best thing he could do to delay the progression of the disease was exercise.  “The doctor told me to ‘use it or lose it’ so that is when I decided I better start exercising.”  And exercise he did.  This is where Mel’s story of being an inspirational athlete begins.

Mel and Roberta quickly became regulars at the JCC.  They attend the Senior Adult program, social programs, and of course, they exercise.  Mel started his exercise journey with swimming and classes.  As his disease progressed, he did not let physical changes impact his attitude and never once did he give up.  Instead he continued to fight back against the disease and found his true athletic calling with Rock Steady Boxing.

Mel was one of the original four members of the JCC’s Rock Steady Boxing program for people with Parkinson’s disease.  Twice a week, Mel straps on his gloves and punches until he is exhausted.  Mel never worries about limitations and instead finds ways to do anything he can to stay moving and when the gloves go on, the fight comes out.  Mel can pack a mean punch and anybody observing him can’t help but see how happy he is while working out.  When asked why he loves Rock Steady he explained that he loves the variety of workouts and the people.

Rock Steady volunteer Mo Caplan said, “Mel is never afraid to push beyond his comfort zone.   He is one of the hardest working members of our group and always challenges himself by modifying and, many times, intensifying exercises to his specific capability.  Even in the face of some serious limitations, I have never seen him quit on himself.  He is highly competitive and is always looking for the next physical and mental well to scale.  He is positive, strong minded, and a great role model for the group and others that face adversity.”

Mel has said joining the JCC was the best decision he could have made when moving to Harrisburg.  His Rock Steady coaches couldn’t agree more as we are a better place with Mel in the building.  No matter the challenges Mel faces he finds the good in a situation and figures out what he can do and never dwells on things he can’t.

Both Amy and Mel are not only inspirational athletes but more importantly inspirational humans.  Their commitment to fitness and their values mimic the actions and deeds of our beloved Ben Cherry and Herm Minkoff.  There is solace in knowing that although we miss Ben and Herm, we have Amy and Mel to continue on as a source of inspiration to us all.  We will be honoring Amy and Mel as well as our 2020 Hall of Fame Inductees on Sunday, March 1 at 10:30am.