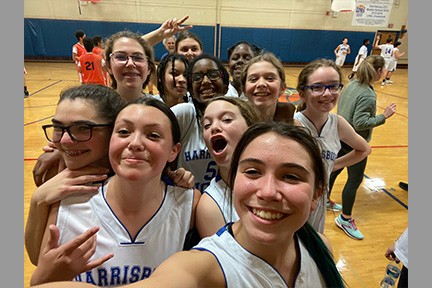 There are several truths when it comes to winter.  The temperature will be cold, snow will fall, and the young athletes of the JCC will be competing hard and representing the JCC on the basketball court and in the pool. Here's an exciting update on the success and progress of our youth sports teams this season.

Coach MarkJoseph Kasian may have a small team, but it is a mighty one.  The team has been in the pool three times each week.  They participated in their first in-person meet in nearly two years on January 23rd.  Fourteen Harrisburg Herons members traveled to the JCC in Wilmington, Delaware.

It was a meet of many firsts: first swim meet, first time winning a race, and first time participating in certain events.

“Despite Wilmington having nearly 100 swimmers, our athletes were not deterred.  They swam hard and fast leaving everything they had in the water” stated Kasian.  “We are looking forward to Championships on March 6th in Cherry Hill, New Jersey.”

The swim team is planning to continue their training in the offseason.  The team wants to continue to grow so please be in touch with MarkJoseph if you know somebody who might be interested in joining the team in the future.

2021-2022 has seen the return of 3rd-5th grade teams after a year hiatus due to COVID.  The Girls team, with sixteen players, has pulled off impressive wins over Our Lady and Lourdes and a come-from-behind buzzer-beater by Jenna Klein to knock off Holy Name.

In addition to Klein, the girls have a large group of 5th graders with talent including Bianca Smigel, McKenna Konowitch, Poppy Lepore, and Ziva Sofian.

The Boys team consists of many first year players, but is led by 5th grade veteran Noah Rubin.  Both teams are learning the fundamentals and basics of the game so that they are ready to step right into the middle school level in the upcoming years.  These teams are the foundation for our future programs.

This year’s Middle School Boys team returns only two players, Yehonatan Nezri and Aaron Pellegrini, from the 2020-2021 CPBL championship team.  The Boys have many first year JCC players who range in experience level.

The fourteen players on the team have grown tremendously over the course of the season.  They finished in 3rd place in the Carlisle Christian Invitational Tournament and recently won a nail biter over Lancaster Country Day.  Guards Alex Mendelson and Tyler Cristaldi and center Brodey Heshler have been key to the JCC team wins.  7th grader Adam Brodsky has stepped up and gained valuable experience to become a leader of the team in the future.  The team will compete in the CPBL championships later in February.

The Middle School Girls team, led by 8th graders Devorah Cheskis and Lilah Krevsky, as well as 7th grader Yael Hodara, have had a year of great improvement.  The team has increased their offensive production over the course of the season, averaging more than twenty-two points per game.  With key victories over Lancaster Country Day and Harrisburg Academy, the girls are looking forward to a strong postseason run, all while building for the future with many key contributions by our 6th and 7th graders.

Despite dealing with injuries, the team remains unbeaten in CYO regular season competition.  This highly athletic team has leaned into their ability to get out quickly on the break and play intense defense in order to win games.

“We are beyond lucky to have four seniors who can play.  Leo and Ean can score from anywhere on the court.  Ben owns the boards and Sid can hit the three on one end and grab a rebound on the other'' commented coach Terri Travers.

Travers is joined on the bench by Coach Booz.  The underclassmen have really grown and improved over the course of this season, making significant contributions which have been key in the face of injuries. The season runs through the end of February.

The High School Girls team may lack numbers, but they make up for their small size with hard work and great conditioning.  This season the High School Girls have only five players in high school.  They are helped with three eighth graders who swing up to play valuable minutes.  The girls, led by Senior Erin Brodsky, Junior Zha’nya Tucker and Sophomores Sydney Plesco, Julia Henry, and Sarah Henry, have been in every game they have played.

With the quick ball handling skills of Sarah Henry, the outside shooting of Plesco and the strong rebounds and drives of Brodsky, this team is competitive and ready to take on any challenge.